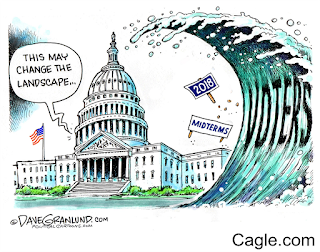 In addition to his fears of what special counsel Robert Mueller may expose to the light of day, Donald Trump, a/k/a Der Trumpenführer, ought to be worried about what will happen if Democrats retake control of the House - and with luck, the U.S. Senate as well.  The irony, of course, is that Trump's foul behavior and normalization of the despicable is one of the strongest factors driving large Democrat turnouts at elections such as the one in Alabama that saw Doug Jones and the one last week in Pennsylvania.  The more "Trump is Trump," the more repulsed and angrier voters outside of white supremacist and Christofascists circles become thereby guaranteeing more huge Democrat  surges at the voting booths.  A piece in Roll Call looks at the predictions that Democrats will win more than enough seats to retake control of the House of Representatives.  Here are highlights:

Seven and a half months before the midterm elections, the combination of attitudinal and behavioral evidence leads to a single conclusion: The Democrats are very likely to win control of the House in November.

President Donald Trump’s job approval rating has settled into a relatively narrow range, with between 39 percent and 42 percent of registered voters approving of his performance. Only 33 percent to 37 percent of respondents say that the country is headed in the right direction, another bit of evidence that reflects the extent of support for Trump and the Republican Party.

The current congressional generic ballot question suggests that Democrats have an 8- or 9-point advantage, a significant margin even if it is at least a couple of points below what Democrats would ideally want going into the midterms.

Taken together, these numbers paint a dangerous picture for [Trump] the president and his party.

The new March 10-14 NBC News/Wall Street Journal poll of adults is consistent with other surveys over the past six months. It shows Democrats with a large generic ballot advantage among younger voters, women, whites with at least a college degree and voters age 65 and older.

The GOP’s great strength in the generic ballot is among two pro-Trump groups, men and whites without a college degree. Unfortunately for the party, the survey also shows Democrats, whites with a college degree and older voters as having the greatest interest in the election (and therefore the greatest likelihood of voting). Each of those groups prefers a Democratic Congress.

Moreover, while independents don’t traditionally turn out in big numbers in midterms, one veteran Republican strategist sees them as a huge problem this year. “They are tired of the drama,” he said.

The behavioral part of the equation is just as troubling for Republicans, since it confirms the survey data.

Trump carried Pennsylvania’s 18 District by 20 points, but GOP nominee Rick Saccone ran about even with his Democratic opponent last week.  And in a Wisconsin state Senate special election in January, a district Trump carried by 17 points went Democratic by about 10 points.

But the recent trend is clear — Republicans are swimming against a strong current.“It’s baked in now,” one veteran Republican campaign veteran told me, noting the GOP’s problems with women and college-educated voters. “We knew single women hated [the Republican Party]. We couldn’t do anything about that. But married women were different. We figured out how to deal with them by talking about pocketbook issues. But now college-educated women hate us. Even with the current economy. It’s the bullying, the nastiness, the tweeting. It’s all about Trump’s behavior.”

Republican insiders also worry that a chunk of “Trump voters” won’t turn out in November even though they still like the president personally.  . . . .[T]he campaign season is likely to lead to more Trump political rallies, where his freewheeling style and off-the-cuff comments can create more controversies.

So, what is the current trajectory of the 2018 midterms? I interviewed a wide range of campaign professionals, including some sympathetic to the president. All insisted on anonymity, and almost all believe the House will flip.

The veterans generally expect GOP losses in the 30- to 45-seat range, far more than the two-dozen seats House Democrats need for majority control.  The retirement of longtime Republican incumbents from competitive districts is adding to the problem, as is candidate fundraising.

The burden is on Republicans — and [Trump] the president — to change the cycle’s current trajectory. If they don’t, the House will flip.

While I worry about the damage that he may do between now and November, the very best thing for Democrats will be for Trump to continue being his nasty, lying, bullying, incompetent self.  A Democrat controlled House and Senate are the only way to restrain Trump and, if the nation is lucky, remove both Trump and Pence from office.  Yes, I believe Pence is up to his eyeballs in Trump's dirty business despite his vomit inducing efforts to appear priggist and sanctimonious.
Posted by Michael-in-Norfolk at Thursday, March 22, 2018