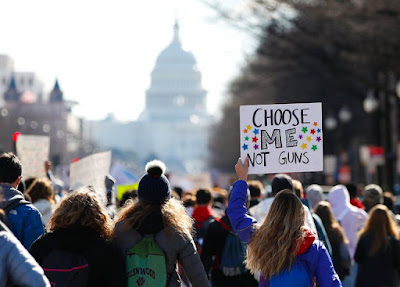 As students and other advocates for meaningful, common sense gun control laws march in Washington, D.C. today and in other cities across the country - Norfolk and Newport News have marches - a column in the New York Times reminds students and others of what the next step needs to be: targeting pro-NRA Republicans in competitive congressional districts.  March in those districts and get involved in supporting challengers to Republicans bought and paid for by the NRA and the gun manufacturers who hide behind its facade.  Here in southeast Virginia, Scott Taylor of the 2nd District needs to be defeated.  The same goes for Rob Wittman of the 1st District.  If students want to make change happen, they and their families and friends need to change who holds seats in Congress.  Here are column highlights:

It has been 38 days since the mass shooting at Marjory Stoneman Douglas High School in Parkland, Fla.; 174 days since the shooting at a concert in Las Vegas; 1,011 days since the killings at a church in Charleston, S.C.; and 1,926 since the tragedy at Sandy Hook Elementary School. Ten days ago, students organized a nationwide school walkout to demonstrate their outrage about these and other shootings.


On Saturday they plan to amass in Washington to pressure a Congress that has done nothing meaningful to protect American children in classrooms, movie theaters, churches, malls — because, thanks to the National Rifle Association, many of their elected representatives are too busy protecting their re-election.

My advice to the students? When you finish marching on the mall, march into the specific congressional districts where you can actually make a difference.

The midterm elections are in eight months. . . .  in this election there are more than 40 truly competitive districts, including many where you can make a real difference by helping replace an incumbent who consistently supports the gun lobby with a challenger who won’t.

Go to the suburbs of Philadelphia, where Representative Ryan Costello (who has an A rating from the N.R.A.) is being challenged by several Democrats, including Chrissy Houlahan, a former Air Force captain who supports closing the loophole on sales at gun shows and renewing the federal assault weapons ban, among other steps. The Pennsylvania Supreme Court’s redrawing of the state’s district lines has transformed Mr. Costello’s already competitive district from one that was almost evenly split between Donald Trump and Hillary Clinton to one that supported Mrs. Clinton by 9 points.

March to the southern tip of Florida, not to vacation in flip-flops but to flip a district. There, Representative Carlos Curbelo (who has a B+ rating from the N.R.A. and an “N.R.A. lap dog” label from the Brady Campaign) is also being challenged by several Democrats, including Debbie Mucarsel-Powell, whose father was shot to death when she was 24.  Ms. Mucarsel-Powell supports banning the sale of military-style weapons like the AR-15 used in the Parkland shootings and would strengthen background checks so that domestic abusers, those affected by mental illness and terrorists can’t purchase guns.

Try the suburbs of Minneapolis-St. Paul, specifically the Second and Third Congressional Districts. Mr. Trump was virtually even with Mrs. Clinton in the Second and lost to her in the Third. Representative Jason Lewis supported concealed-carry reciprocity, and opposed universal background checks and any ban on semiautomatic weapons. His neighbor, Representative Erik Paulsen, shares the same position on concealed-carry reciprocity and universal background checks. Both have A ratings from the N.R.A.; both have opponents supporting sensible gun security laws.

You can canvass in the shadows of the Catskills in New York, in the suburbs of Denver and in Fairfax, Va. You can phone-bank in the competitive districts in Orange County, Calif., as well as the northern San Joaquin Valley, northern San Diego and eastern Los Angeles County. Ask your peers to show up at campaign events and town halls in the exurbs of Chicago and in Iowa.

You don’t have to win every district. Replacing just a handful of incumbents in districts that are highly competitive while also offering a vivid contrast in positions on guns could bring the larger change you need and deserve.

Why? Because there’s nothing on Capitol Hill more clarifying than watching colleagues pay the ultimate political price for their positions. Seeing a colleague defeated because of a hard-core position tends to soften the resistance of those who survive.

You can stage marches and school walkouts, but then walk into the swing congressional districts that matter. In the end it’s not about standing up to be heard. It’s about changing who sits in Congress.

It is long past time that NRA lap dogs be driven from office and a strong message sent that voters, not a front group for gun manufacturers are what should matter.
Posted by Michael-in-Norfolk at Saturday, March 24, 2018