Kenworthy and Rippon Win Without Making the Podium 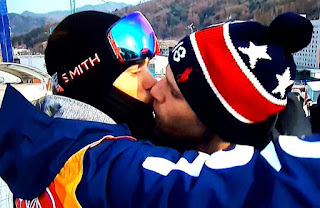 Neither of America's out gay athletes made the podium in their individual events, but as a piece in the New York Times and the Washington Post note, both were winners at the 2018 Olympic Games in a much more personal way: they were free to be their authentic selves without hiding or apologies.  Indeed, a broadcast of Gus Kenworthy giving his boyfriend a quick kiss - see the image above - won much praise on Tweeter (yes, naturally, the usual hate merchants are not pleased).  As I have tried to stress over the years on this blog, living in the closet is soul killing.  Moreover, even if it doesn't lead to suicide, the energy and emotion wasted on self-hate and living a life like that of an actor on a stage is utterly exhausting, not to mention destructive of finding happiness.   Hopefully, the examples of Kenworthy and Rippon will help many young gays from suffering in the closet wracked by needless unhappiness. First this from the Times piece:

Gus Kenworthy was nursing a hip hematoma, a broken right finger and a bruised ego after a 12th-place finish in the men’s ski slopestyle final, the same event where he won the silver medal four years ago.

Speaking on Sunday while the ceremony introducing the medalists proceeded without him at Phoenix Snow Park in Pyeongchang, South Korea, Kenworthy said, “It’s all good.”

This is Kenworthy’s second Olympics but his first as an openly gay athlete. He and Adam Rippon, the only other openly gay male athlete on the United States team, will not leave here with individual gold medals, but they are among the biggest American stars at these Games.

Here at the Pyeongchang Games, Kenworthy, 26, has engaged in physical displays of affection with men in public. He gave Rippon a peck on the cheek during the opening ceremony and kissed his boyfriend, Matthew Wilkas, before Sunday’s qualifying runs.

If Kenworthy had to choose between winning a medal while leading a closeted existence or failing to grace the podium while living an authentic life, it wouldn’t be close.

“If you look at me, I’m bummed but I’m not sulking, I’m not crying,” he said, adding, “Being out at these Games has kind of meant the world to me, just getting to really be myself and be authentic. And I think landing a run in the final and getting on the podium obviously would have been icing on the cake, but even though it didn’t happen for me I still had a wonderful Olympic experience.”

On the eve of the slopestyle final, Kenworthy and his boyfriend attended the men’s free skate to support Rippon, where they proudly waved a rainbow flag. Kenworthy said he was unaware that a television camera had recorded his pre-competition kiss with Wilkas.

“I think that’s amazing,” he said. “That’s something I wanted at the last Olympics, to share a kiss with my boyfriend at the bottom and it was something I was too scared to do for myself. And so to be able to do that, to give him a kiss and have that affection broadcast for the world is incredible.”

“That’s not something I had as a kid,” he added. “I didn’t see a gay athlete at the Olympics kissing their boyfriend. I think if I had it would have made it a lot easier for me.”

Adam Rippon, the openly gay figure skater who helped the United States win a bronze medal in team competition and became one of the biggest breakout stars of the PyeongChang Olympics, has gotten his first big break before the Winter Games have even concluded.

Rippon, a darling of the competition for saying things that have been at turns smart, creative and refreshing for viewers, has been hired by NBC as a correspondent for the rest of the Games. NBC confirmed the news, first reported by USA Today, with Rippon expected to work on TV as well as the digital and social media platforms.

Hiring Rippon is not without controversy, though. He is at odds with Vice President Pence over gay rights and has said he will not go with the U.S. team to visit President Trump if invited to the White House.

He has been a must-see as an interview subject, whether he’s speaking about being bullied as a kid or just kidding around. It is, as he has said, “really fun to be me,” and that has been clear from his very first TV moments.


I love these guys!

Posted by Michael-in-Norfolk at Sunday, February 18, 2018