Why Does the Far Right Demand Respect It Doesn't Give to Others? 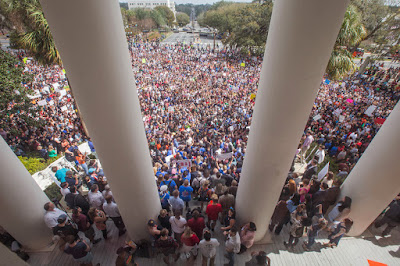 Whether the issue be gun control or the right's false flag of "religious liberty," conservatives demand that their beliefs and sensibilities be afforded respect even when they are directly controverted by empirical and objective fact, yet  they afford no respect to the beliefs of others.  Being gay, one sees the double standard all the time, especially from ignorance embracing Christofascists who want respect for their "deeply held beliefs" yet who attack anyone who rejects such antiquated and  scientifically impossible beliefs.  Then, of course, there are working class whites who voted for Trump and Republicans even though they advance policies that directly harm such voters.  Personally, I am over respecting the beliefs of  those who are bigots or simply dumb as bricks when facts do not support their claimed beliefs.  Deciding to embrace ignorance and bigotry is a choice and deserves no deference or respect. This is especially true of "conservatives" who slime those (i) who refute their beliefs, or (ii) with whom they disagree.  A prime example is what is being done to the Parkland high school students now being dragged through the mud by right wing sites and conspiracy theory formenters.  A column in the Washington Post looks at the hypocrisy of gun fanatics who want respect from others while giving none in return.  Here are excerpts:

Supporters of even modest restrictions on firearms are regularly instructed that their ardent advocacy turns off Americans in rural areas and small towns. Those in favor of reforming our firearms laws are scolded as horrific elitists who disrespect a valued way of life.

And as the mass killings continue, we are urged to be patient and to spend our time listening earnestly to the views of those who see even a smidgen of action to limit access to guns as the first step toward confiscation. Our task is not to fight for laws to protect innocents, but to demonstrate that we really, honestly, truly, cross-our-hearts, positively love gun owners and wouldn’t for an instant think anything ill of them.

What is odd is that those with extreme pro-gun views — those pushing for new laws to allow people to carry just about anytime, anywhere — are never called upon to model similar empathy toward children killed, the mourning parents left behind, people in urban neighborhoods suffering from violence, or the majority of Americans who don’t own guns.

Depending on the survey, somewhere between 58 percent and 68 percent of us live in households without guns. But no one who belongs to the National Rifle Association is ever told to prove their respect for our way of life. Rarely is it pointed out that the logic of the gun lobby’s position is to create a world in which everyone will need a gun, whether we want one or not.

The students at Marjory Stoneman Douglas High School, an institution that suffered the worst effects of our inaction on guns, have not gotten the memo that they are supposed to shut up, and may they be blessed for this. You can tell their angry outspokenness is having an impact, and not only because President Trump has taken modest steps to suggest he hears the message. More telling is that some of the same right-wingers who demand deep respect for gun culture have shown no scruples about trashing the kids.

Bill O’Reilly was so upset at the attention their protests are drawing that he accused the media of “promoting opinions by teenagers who are in an emotional state and facing extreme peer pressure in some cases.” The condescension is revolting, and never mind that without emotionalism and peer pressure to conform, O’Reilly’s former employer, Fox News, would go out of business.

Former representative Jack Kingston (R-Ga.) doubted the capacity of these students to think or act for themselves. “Their sorrow can very easily be hijacked by left-wing groups who have an agenda,” he said on CNN. Young people who disagree with him can’t possibly have minds of their own.

No wonder the foes of gun sanity are worried. On Wednesday, the students and supporters gathered at the state Capitol in Florida shouting “vote them out!” — a day after the state’s Republican-led legislature voted down a ban on many semiautomatic guns and large-capacity magazines.

How come only one side of the supposed culture war on guns is required to exude respect for the other? Because the culture-war argument is largely a gimmick pushed by the gun lobby as a way of demonizing its opponents. None of us who endorse stronger gun laws wants to disrupt anybody else’s way of life. And none of the measures we are proposing would do that.

What truly alarms the gun lobby is that many steps to curb the scourge of gun violence enjoy broad support, from those who own guns as well as those who don’t. A Quinnipiac pollreleased on Tuesday, for example, found that 97 percent of Americans favor background checks for all gun buyers.

I am all for Americans reaching out across our cultural divides. But if we wait to act until our cross-cultural understanding is complete, many more who might have been saved will die.

Posted by Michael-in-Norfolk at Thursday, February 22, 2018