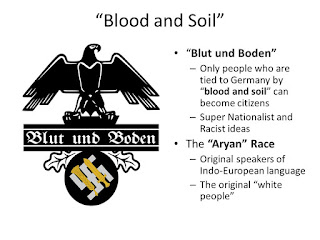 My Republican grandparents and even my Republican parents would not recognize today's GOP  on display at the CPAC gathering in Washington, D.C.  Indeed even during my own time as a GOP activist likely a majority of the attendees would have been viewed with outright horror given that the party base now consists of those that would not have been deemed politically, much less socially acceptable.  Sadly, as a piece in the Washington Post notes, the GOP looks more like one of European ethno-nationalist .  Ironically, one speaker attacked "European socialism" and ignored the reality that Europe now has more upward mobility than the United States, European citizens have better access to health care, and the social safety net does not view millions of individuals as disposable garbage.  Indeed, it was no accident that the niece of French far-right extremist Marine Le Pen (who has received funding from Putin's Russia) was in attendance and addressed the gathering yesterday.  Sane and moral people need to be afraid.  Here are column excerpts:

The Conservative Political Action Conference, an annual conclave of the American right, is underway just outside Washington. President Trump will deliver a speech there on Friday, while Vice President Pence opened proceedings Thursday with a paean to his boss's first year in office, a recitation of his Christian bona fides and a Republican rallying cry ahead of pivotal midterm elections this year. But it has not gone off without controversy. Marion Maréchal-Le Pen, the youthful niece of French far-right heavyweight Marine Le Pen, also addressed the gathering Thursday. Her appearance dismayed some establishment Republicans, who were not eager to associate with a political faction linked to the dark remnants of European fascism.
The acceptance of people such as Maréchal-Le Pen and British anti-immigrant campaigner Nigel Farage, who is speaking Friday, seemed to underscore the hard-rightward drift of the Republican Party. “These are not conservatives; these are members of an international ethno-nationalist populist movement," Matt Lewis, a moderate Republican commentator, said to NBC News. But he added that this was in keeping with Trump's ultra-nationalism. CPAC has “featured speakers who raged against gays, Muslims and immigrants and, for years, it banned panel discussions about gay rights,” noted right-wing Washington Post blogger (albeit indefatigable Trump critic) Jennifer Rubin. “However, it was also a place where mainstream conservatives came to speak, and where policy gurus from think tanks had calm discussions. . . . Now CPAC encapsulates the GOP. Adherents of President Trump’s brand of Republican politics do not bother to disguise their extremism,  conspiracy theories, paranoia or xenophobia.” Maréchal-Le Pen displayed much of that paranoia and xenophobia during her 10-minute speech. “France is no longer free today,” the 28-year-old said. "After 1500 years of existence, we now must fight for our independence." She went on to bash the European Union, earning cheers from the CPAC crowd. Her remarks echoed Trump's own blood-and-soil rhetoric [first used by Hitler and the Nazi Party] over the past year. She decried what she called the scourge of immigration, bashed globalization, signaled a desire to quit NATO and cozy up to Russia, gestured at her opposition to same-sex marriage, and championed the “historical continuity” of her nation. . . . . It’s still hard to see what she gains at home by addressing this audience abroad: Public opinion polling regarding Trump in France finds widespread disapproval of the American president, even among National Front voters. . . . . She is also closer to her grandfather, Jean-Marie Le Pen, the National Front's founder who has a long record of Holocaust denial and other bigotry. More mainstream politicians on the center-right are aping Le Pen’s brand of identity politics. That is a phenomenon all too familiar to those watching Trump's America and the events unfolding in Washington this week.

Posted by Michael-in-Norfolk at Friday, February 23, 2018