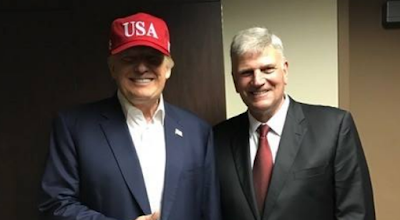 While there was much to dislike about the late Billy Graham (a previous post looked at some of these), compared to his son Franklin, Billy Graham looks most attractive.  In his thirst for political power - and I suspect wealth along with it, Franklin Graham is helping to kill the evangelical brand in America. Rather than being known for thoughtful adherence to scripture, Franklin Graham is making evangelical Christianity best know for its hypocrisy and hatred of others.  Gay and Muslims being the favored targets for hate.  A piece in Politico looks at how Franklin Graham (along with Jerry Falwell, Jr.) is destroying his father's brand, if you will, and likely accelerating the demise of evangelical Christianity - and Christianity in general - in America.  Here are article highlights:

[A]lmost two decades ago, [Billy] Graham handed over the keys of the empire to his son, Franklin. And if you want to chart the troubled recent course of American evangelicalism—its powerful rise after World War II and its surprisingly quick demise in recent years—you need look no further than this father-and-son duo of Billy and Franklin Graham. His son is—not to put too fine a point on it—a political hack, one who is rapidly rebranding evangelicalism as a belief system marked not by faith, hope, and love but by fear of Muslims and homophobia.


Franklin Graham is a very different sort of man, better known today for his right-wing political pronouncements than for his evangelism. Shortly after 9/11, Franklin Graham provided the sound bite of today’s culture wars when he denounced Islam as “a very wicked and evil religion.” He later became the standard bearer for the view that Islam is, in his words “a religion of hatred . . . a religion of war.”

In addition to purveying the birther nonsense that helped to propel Donald Trump to political prominence, Franklin Graham suggested that President Barack Obama was not a Christian and might in fact be a secret Muslim. Along with Jerry Falwell’s son, Jerry Falwell Jr., he helped to elect Trump president by swinging 80 percent of white evangelical voters to his side. And then when Trump was elected he attributed his victory not to a surge of White Christian support or to swing states in the Midwest but to divine providence.

Franklin Graham seems blissfully unaware of the possibility that there might be even the slimmest of gaps between the words that come out of his mouth and the words written down in scripture. More damningly, he demonstrates no awareness of the ways in which his political pronouncements are breaking down the evangelical witness his father devoted so much energy to building up.

During the 1940s and 1950s, the United States persisted in its religiosity as European countries secularized. In fact, the Americans witnessed a powerful religious revival after the war, thanks in part to Billy Graham. That revival is over. Religion is now declining in the United States, and evangelicalism with it. In fact, over the last decade, the portion of white evangelical Protestants in the United States declined from 23 percent to 17 percent. . . . .The most significant development in American religion in recent years is the shocking rise of the religiously unaffiliated (otherwise known as “nones”), who now account for roughly one quarter of all Americans. This increasing distance from religious institutions is accompanied by increasing distance from religious beliefs and practices.

There are many reasons for this decline in religious believing and belonging. But the most important in my view is the increasing identification of the Christian churches with right-wing politics. If you are among the 26 percent of eligible voters who voted for Trump, you likely applaud this development. But what about the other 74 percent?

The qualities of temper and judgment that made Billy Graham so singularly successful are almost entirely lacking in his son, who now imperils his father’s legacy. Thanks to Franklin Graham and his cronies on the Religious Right, American evangelicalism has now become first and foremost a political rather than a spiritual enterprise. The life of Billy Graham helped build it up. And his death may well have ensured its demise.


The author is a professor of religion at Boston University.
Posted by Michael-in-Norfolk at Saturday, February 24, 2018

Please let's not forget the greed of Billy Graham's spawn. To obscure the amounts he pays himself from the free-will offerings (over a half-million a year plus tax-free housing), the scamvangelist has taken steps to declare as much of his empire as possible a church group, freeing it from the requirement to make public disclosure of its finances while still retaining tax deductibility for its contributors.