America Is Under Attack and Trump Doesn't Care 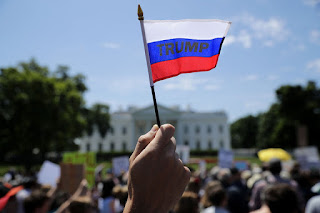 As frightening as it is to admit it (I feel old as dirt), I have lived under twelve (12) presidents of the United States of America prior to the current Trump/Pence regime.  Never in that span of years do I remember an occupant of the White House ignoring an attack on the nation by a hostile foreign power that would love nothing better than to destroy America's democracy.  Yet now, under Trump/Pence, that is what we are witnessing as Trump focuses on satiating his ego and do all in his power to distract the public from the Russiagate investigation which is creeping closer and closer to Trump - and if the nation is lucky, Mike Pence as well. A piece in The Atlantic by David Frum a conservative and former Republican looks at Trump's betrayal of America.  A second column in the New York Times yesterday likewise notes that Trump's efforts to hide the truth about Russiagate from the public is harming the country.  First these highlights from The Atlantic:

As the rest of America mourns the victims of the Parkland, Florida, massacre, President Trump took to Twitter.

Not for him the rituals of grief. He is too consumed by rage and resentment. He interrupted his holidaying schedule at Mar-a-Lago only briefly, for a visit to a hospital where some of the shooting victims were treated. He posed afterward for a grinning thumbs-up photo op. Pain at another’s heartbreak—that emotion is for losers, apparently.
Having failed at one presidential duty, to speak for the nation at times of national tragedy, Trump resumed shirking an even more supreme task: defending the nation against foreign attack.

Last week, Special Counsel Robert Mueller indicted 13 Russian persons and three entities that conspired to violate federal election law, to the benefit of Trump and Republican congressional candidates. This is not the whole of the story by any means.

This Mueller indictment references only Russian operations on Facebook. It does not deal with the weaponization of hacked information via WikiLeaks. Or the reports that the Russians funneled millions of dollars of election spending through the NRA’s political action committees. But this indictment does show enough to answer some questions about the scale and methods of the Russian intervention—and pose a new question, the most important of them all.

The new question is this: What has been—what will be—done to protect American democracy from such attacks in the future? The Russian attack in 2016 worked, yielding dividends beyond Vladimir Putin’s wildest hopes.

Americans once thought it was a big deal that Alger Hiss rose to serve as acting temporary secretary general of the United Nations. This time, a Russian-backed  individual was installed in the Oval Office.

From that position of power, Trump has systematically attempted to shut down investigations of the foreign-espionage operation that operated on his behalf. He fired the director of the FBI to shut it down. His White House coordinated with the chairman of the House Intelligence Committee to misdirect the investigation. He mobilized the speaker of the House to thwart bipartisan investigations under broadly respected leadership. He has inspired, supported, and joined a national propaganda campaign against the Mueller investigation.

And all the while, Trump has done nothing—literally nothing—to harden the nation’s voting systems against follow-on Russian operations. On Sunday, he publicly repudiated his own national-security adviser for acknowledging at the Munich Security Conference the most incontrovertible basics of what happened in 2016.

It’s worth thinking about what a patriotic president would have done in Trump’s situation. He would be leading the investigation himself. He would be scouring his own campaign—doing everything in his power to reassure the country that whatever the Russians may or may not have done, his government owed Putin nothing. . . . . At every turn, Trump has failed to do what a patriotic president would do—failed to put the national interest first. He has left the 2018 elections as vulnerable as the 2016 elections to Russian intervention on his behalf.

But Americans who cherish democracy and national sovereignty need to start discussing a bigger and darker question.  Authoritarian nationalist parties across the western world have outright cooperated with the Russians. Russian money has helped to finance the National Front in France, and the election and re-election of the president of the Czech Republic.

The New York Times continues the theme that Trump is a threat to America.  Here are excerpts:

Our democracy is in serious danger.  President Trump is either totally compromised by the Russians or is a towering fool, or both, but either way he has shown himself unwilling or unable to defend America against a Russian campaign to divide and undermine our democracy.

That is, either Trump’s real estate empire has taken large amounts of money from shady oligarchs linked to the Kremlin — so much that they literally own him; or rumors are true that he engaged in sexual misbehavior while he was in Moscow running the Miss Universe contest, which Russian intelligence has on tape and he doesn’t want released; or Trump actually believes Russian President Vladimir Putin when he says he is innocent of intervening in our elections — over the explicit findings of Trump’s own C.I.A., N.S.A. and F.B.I. chiefs.

In sum, Trump is either hiding something so threatening to himself, or he’s criminally incompetent to be commander in chief. . . . . Russia is not our friend. It has acted in a hostile manner. And Trump keeps ignoring it all.

Up to now, Trump has been flouting the norms of the presidency. Now Trump’s behavior amounts to a refusal to carry out his oath of office — to protect and defend the Constitution.

America needs a president who will lead our nation’s defense against this attack on the integrity of our electoral democracy.  What would that look like? He would educate the public on the scale of the problem; he would bring together all the stakeholders — state and local election authorities, the federal government, both parties and all the owners of social networks that the Russians used to carry out their interference — to mount an effective defense; and he would bring together our intelligence and military experts to mount an effective offense against Putin — the best defense of all.

It is so obvious what Trump is up to: Again, he is either a total sucker for Putin or, more likely, he is hiding something that he knows the Russians have on him, and he knows that the longer Mueller’s investigation goes on, the more likely he will be to find and expose it.

Donald, if you are so innocent, why do you go to such extraordinary lengths to try to shut Mueller down?

Given what is happening, it is increasingly difficult not to link the "T" word with Trump - and perhaps Pence as well, if he is involved in the coverup and obstruction efforts.
Posted by Michael-in-Norfolk at Tuesday, February 20, 2018