Evangelicals Sell Their Souls for Trump 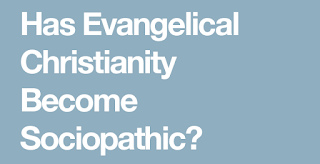 Speaking of the toxicity of evangelical Christians, a column in The Hill looks at how this segment of American society has sold its collective soul for Donald Trump, a man now confirmed to have paid hush money at least twice to cover up stories of marital infidelity while his current wife was at home with his infant son.  And let's not forget Trump's bragging about sexually molesting women in the Access Hollywood tape.  These modern day Pharisees who want to regulate the sex lives of everyone else - even as they have the highest usage of Internet porn - continue to turn a blind eye toward a man whose behavior is abhorrent to anyone with true moral standards.  Here are article highlights:

The money changed hands just before the 2016 election to allegedly stop her from talking about a sexual affair with candidate Trump that took place in 2006, just after Trump’s wife had a baby.  There is no longer any way to deny the fact of the payment and the nature of the tawdry story.

Also, there is no way to deny a former Playboy playmate’s telling of another extramarital affair with the president in 2006 and 2007.

And there is no way to deny that FBI Director Christopher Wray testified to Congress last week that Trump’s White House knew about two serious charges of domestic abuse against top aide Rob Porter but let him keep his job. Porter resigned only when those allegations became public.

Yes, the injunction to let he who is without sin cast the first stone is an important one. But it now seems clear that evangelical Christians, who hold up biblical edicts on lying, cheating and adultery, don’t care about the word of God when it comes to Trump.

A January poll for The Washington Post and ABC News “found 68 percent of white evangelical Protestants approve of Trump’s job performance — a figure that is nearly double that of the population as a whole and that is higher than any other religious or demographic group.”For a group that regularly preaches about the “sanctity of marriage” and inveighs against the evils of divorce, it was a major political puzzle to me when evangelicals first backed the thrice-married, adulterous Trump over Hillary Clinton.

She suffered years of public humiliation rather than breaking up her family, turning away from marriage vows and divorcing her philandering husband.

And now the puzzling behavior of evangelicals is pushed to the limit by their support for Trump despite the slimy facts of the Stormy Daniels story.

What we are seeing is a hollow core in evangelical faith as practiced by its leaders. . . . . [Pastor Robert] Jeffress said he doesn’t “care” if Trump is a religious phony but only that Trump has “embraced and enacted” policies favored by Jeffress and other evangelicals.

That led Tara I. Burton to conclude in an article on Vox that Jeffress’ indifference about Trump’s nasty earlier comments about "shithole countries" in fact “revealed the dark heart of Christian nationalism: It is as much…about jingoism and ethno-nationalism as it ever has been about Christian values.”

When it comes to Trump, the nation’s political, social and historical norms do not matter anymore.

Posted by Michael-in-Norfolk at Tuesday, February 20, 2018