When Will the Catholic Church End Its War on Gays? 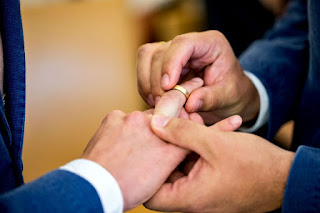 Recently through one of the Google search agents I use to aggregate news stories, I came across a review of the movie "Call Me By Your Name" in the National Catholic Register - which is NOT to be National Catholic Reporter which realizes it is the 21st century, not the 12th century - wherein the reviewer was responding to attacks by Catholic extremists for not strongly condemning the movies strongly enough.  As I am inclined to do, I left several comments on the piece which were for the most part were not greeted kindly (frankly, I was surprised the moderator even published my comments).

What struck me by many of the comments was an apparent need on the part of many to have someone to condemn and look down upon in order that they could feel superior - much like poor whites that my southern belle grandmother would have deemed "poor white trash" that desperately need to discriminate against blacks due to a similar desperate need to feel superior to someone else.

The second thing that struck me was the blind embrace of ignorance and a refusal to even slightly admit that medical and medical knowledge has progressed light years from what was know at the time the Church fathers - many of whom seemingly needed mental health care themselves by modern standards - concocted the Church's bizarre rules on human sexuality.  Some even cited writings of the far from holy John Paul II to justify their hatred and bigotry, conveniently forgetting that Popes have proven wrong on moral issues before - e.g., the Popes that issued determination upholding slavery.  The truth is that the Church is wrong in its anti-gay animus and that it is causing countless  younger Catholics to leave the Church.  A piece in the National Catholic Reporter looks at the dilemma facing the Church which could well decide whether the Church largely collapses in modern nations.  Here are excerpts:

In a recent radio interview, Cardinal Reinhard Marx of Munich-Freising said the Catholic Church needs to provide better pastoral support for lesbian or gay people but stopped short of endorsing blessings for same-sex couples as a general practice or policy.

Marx, the archbishop of Munich, is one of the most influential leaders in the Catholic Church. He serves on Pope Francis' Council of Cardinals, heads the German Bishops' Council, and is president of the Commission of the Bishops' Conferences of the European Community.

Marx's struggle to articulate a coherent strategy for addressing the needs of the church's gay and lesbian members (the interview does not seem to have included any reference to transgender, intersex or bisexual people) once again shows the dilemma for those trying to work within the framework of current doctrine, church structure and political polemic of institutional Catholicism. There seems to be a recognition by the cardinal that current dogma and practice are failing many in the church, and a desire to find ways to respond to their needs. Marx sees pastoral responses to individual situations as the solution.

The problem with this approach is that it reinforces the church's official view of lesbian and gay individuals and same-sex couples as less than full members of the body of Christ. It requires priests and other pastoral workers to determine whether an individual situation merits the risk of a secret blessing, and implicit validation of the person's sexual orientation and intimate relationships.

Perhaps the only way for the institution to change is through an incremental approach, whereby the number of individual cases gradually increases, and the experience of those involved somehow convinces a sufficient number of those in authority that a change in doctrine is merited. Then the process of debating the theology and tradition that might support such a change could begin. How long such discernment might take is anyone's guess.

In the meantime, the official church's persistent inability to fully embrace LGBTQI people and their families will continue to drive away not only many of them, but also many members of their extended families, friends, and allies — not to mention massive numbers of young people in general.

It bears noting that, in the United States and many other parts of the world, the people of the church are far ahead of its leadership on LGBTQI issues. In countries where same-sex marriage is legal, tens of thousands of Catholics have rejoiced in witnessing the civil marriages of their children, grandchildren, parents, siblings, cousins and friends, many in ceremonies that include a spiritual blessing.

Countless others, especially where marriage equality has yet to be achieved, have joined their loved ones in rituals that celebrate the commitments lesbian and gay couples have made to each other. Their presence and pledge to honor and support these couples represent the triumph of love over law.

It is a hopeful sign that Marx, other German bishops, and indeed numerous Catholic Church leaders around the world are grappling openly with the place of LGBTQI people in the church. An even more hopeful step will occur when church leaders finally engage the true experts in this struggle in genuine dialogue, and we begin to work out solutions together.

Personally, I view anyone who is LGBT that remains in the Catholic Church as engaging in a form of masochism or still suffering greatly from internalized homophobia (sorry, Andrew Sullivan, but why continue to torture yourself?).  Indeed, one former acquaintance continues to remain a Catholic and not surprisingly has the attendant emotional psychological conflicts and damage one would expect.  The simple solution is to walk away.  As for family members of LGBT individuals who remain in the Church, deliberately or not, they are harming their LGBT relatives.   Only massive losses in membership - and most importantly, revenues - will hasten change in the Church.
Posted by Michael-in-Norfolk at Sunday, February 18, 2018

If history is any guide Rome will drag it's feet for as long as possible. Then they'll canonize some obscure priest who worked for LGBT rights and claim they led the way the whole time.