“The Canaries Are Dying”: Republicans Pick Their 2018 Poison 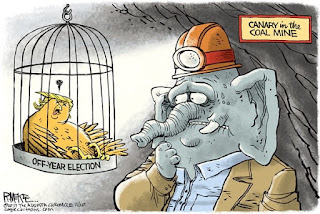 Donald Trump  - along with his chief sycophant, Mike Pence - continues to be a blight on America.  Outside the toxic core of the Republican Party base which is comprised of religious extremists and white supremacists, Der Trumpenführer remains unpopular and it would seem that he is doing all in his power to further alienate minorities, the LGBT community, those concerned about gun control or moral decency.  Indeed, the list goes on and on, leaving Republicans up for reelection forced to choose between embracing Trump to appease the ugliest elements of the party base or distancing themselves from him at the risk of those same ugly elements staying home on election day.  Meanwhile, Democrats have been raking up surprise wins in a number of traditionally red districts. A piece in Vanity Fair looks at the choices facing the GOP as the 2018 mid term elections approach.  Here are highlights:

These races are like canaries in the coal mine,” Steve Israel, a former New York congressman and chairman of the Democratic Congressional Campaign Committee, told me last week. “For Republicans, the canaries are dying.”

The day before we spoke, Democrats had picked up a statehouse seat in a deep red district in Missouri, the latest in a series of electoral upsets the G.O.P. has suffered across the country in recent months.

Republican candidates are facing an impossible strategic choice, one that is to some degree independent of the president’s approval rating or any economic factor: tack toward Trump, and potentially lose the center, or forgo Trumpian red meat and watch the base stay home. “What you do when you appeal to that 33 percent is you peel off another 50 percent of the voters who will go, ‘Fuck you, I will crawl over broken glass to vote against you because you are a goddamn Donald Trumper,’” Rick Wilson, a G.O.P. strategist and vocal Never Trumper, told me, adding that without Clinton, Trump “has to stand on his own two feet.” And although Trump won’t be on the ballot in 2018, every Republican candidate this fall will be viewed as a Trump proxy. Meanwhile, Democrats will have the luxury of focusing their energy elsewhere. “They get to do that because they’re out of power. That’s a big advantage to them,” the Republican strategist, speaking on the condition of anonymity, told me. “They let the national environment take care of it and they run on issues that are local and important.”Since Donald Trump took office, Democrats have flipped 36 statehouse seats from red to blue—a solid down payment on the the ones they lost under Obama—and are aiming to rob the G.O.P. of 24 House seats to secure the majority in the lower chamber. Holding the upper chamber, however, is a lighter lift for the G.O.P., which enjoys several structural advantages.“It’s a poor environment for us. I think the real question is, do we hang onto the Senate?” Terry Sullivan, a G.O.P. strategist who served as Senator Marco Rubio’s 2016 campaign manager, told me. “I don’t think it’s a guarantee. I know the math is in our favor, but I don’t think it is a foregone conclusion that we do.”A string of Democratic upsets in conservative strongholds in special elections since the New Year have opened G.O.P. eyes to the challenge. Last month, Democrat Patty Schachtner secured a nine-point victory in a contentious battle for a state Senate seat in Wisconsin’s 10th District, which Mitt Romney and Trump won by 6 points and 17 points, respectively. Trygve Olson, a G.O.P. strategist who previously managed campaigns in the district, warned on Twitter, “A wave is coming . . . This a suburban-rural district. If the G.O.P. is losing WI-10 lookout!”Republicans were similarly rattled by the Democratic performance in two Missouri special election races. Democrat Mike Revis edged out his opponent by three points in Missouri’s 97th District, which Trump won by 28 points and Romney won by 12 points. Strategists have also noted a trio of elections for bellwether seats in Florida—the state’s 40th Senate District in Miami-Dade, the St. Petersburg’s mayoral race, and Florida’s 72nd House District—in which Democrats triumphed. “This is beyond a trend. The results are in.Also troubling for the G.O.P. is the rate at which Democrats are outraising Republicans. In the final quarter of 2017, more than 40 House Republicans were outraised by at least one, if not multiple, Democratic opponents. The fear is that the Republican Party will be forced to defend traditionally safe states, such as Texas where Democratic Congressman Beto O’Rourke outraised Senator Ted Cruz last quarter in the race for the former presidential hopeful’s Senate seat.The Democratic Party is also recruiting higher quality candidates than in past cycles. “One of the effects of the Trump administration’s negativity is that [there is] a record-breaking number of people who want to run for office . . . . And, Israel noted, whether it’s a result of higher quality Democrats or Trump fatigue, Republican incumbents are bailing.Thirty-five House Republicans have called it quits—roughly half of whom are vacating vulnerable seats—and three G.O.P. senators, Bob Corker of Tennessee, Dean Heller of Nevada, and Orrin Hatch of Utah, have announced plans to retire.While the political environment may seem primed for a blue wave in the fall, anti-Trump sentiment alone won’t be enough to flip the House. And, fortunately for Republicans, Democrats have struggled to coalesce around a party message.
For Republicans, meanwhile, the political calculus becomes whether Trump suppresses turnout, or whether voters—Republican women, in particular—ignore the current White House occupant and vote on other issues. “I think [suburban Republican women] voters are critical in order for Republicans to win their seats because it’s whether they turn out or not. It’s not that they’re going to necessarily vote for the Democrat, it’s whether they stay home,” Sullivan said. “It’s a demographic that Donald Trump did not do well with at all. We’ve got to.

The contours of any potential blue wave will begin to show over the summer. Wilson says Republican lawmakers will begin putting daylight between themselves and the president around August, while television-advertising buys closer to the election will reveal where both parties are focusing their efforts. “You will start to see some Republicans finally start to discover that they weren’t Donald Trump sycophants all along—they were actually strong, principled Republicans,” he said, the sarcasm palpable.

Posted by Michael-in-Norfolk at Monday, February 19, 2018

I wonder what role Russian interference will play in upcoming elections.