Australia Survey: 2 Out of 3 Say Religion More Harmful Than Good 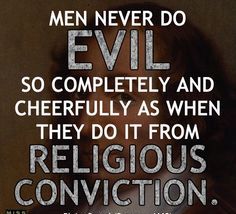 In Australia a battle is ongoing over legalizing same sex marriage.  True to form the Australian equivalents of America's Christofascists are pulling out all the same lies and anti-LGBT propaganda fine tuned by American hate groups.  Meanwhile, a years long sex scandal is engulfing the Roman Catholic Church in which the senior most cardinal is under indictment for sex crimes.  Never bowed by its own hypocrisy, the Catholic Church has loudly and viciously opposed marriage between consenting same sex adults after decades and decades of cover ups of sexual assault by its clergy against non-consenting minors.  Not surprisingly, many Australians are over with religion in general.  Indeed, a new survey revealed that two out of three Australians view religion as a net evil causing more harm to society than good.  Joining Australia in its dim view of religion are Canada, India and a number of European countries where, like India, centuries of bloodshed over religion are part of the national history.  Sadly, I have to agree with the conclusion of  63% of Australians.  A piece in the Sydney Morning Herald looks at the survey results.  Here are excerpts:

A bigger share of Australians than respondents in most other countries think religion does more harm than good in the world, new polling has revealed.

But we are also more comfortable with religious diversity than the international average.
The survey of more than 17,000 people across 23 countries by polling firm Ipsos found opinion is evenly divided about the influence that religion has in society.

It showed 49 per cent of respondents across all countries agreed with the statement "religion does more harm in the world than good".

But the proportion of Australians agreeing with that statement was well above the international average at 63 per cent.

"Australia is one of the more negative countries regarding the perceived harm that religion does," David Elliott from the Ipsos Social Research Institute said.

Only Belgium (68 per cent) had a higher proportion than Australia who agreed religion does more harm than good, while Germany and Spain were on par with Australia.

Australia had an above-average share who felt "completely comfortable" being around people with different religious beliefs to their own (84 per cent).

"While many of us do not have a positive view of religion, we are not translating this negativity to fear or dislike of individuals who have different beliefs to our own," Mr Elliot said.

"In this regard, we are among the more tolerant nations globally. This tolerance may reflect our multi-cultural society or maybe driven by beliefs that negative impacts of religion are more an issue globally than locally."

International opinion was also split when it comes to the importance of religion to a nation's "moral life". Half of those across the 23 countries surveyed agreed with the statement "religious practices are an important factor in the moral life of my country's citizens". Only about four in 10 Australians concurred with that statement, a much smaller share than the two in three Americans who agreed.

The share in the United States who think religion does more harm than good in the world was also well below the international average at 39 per cent.

With Der Trumpenführer's regime busy establishing special rights for Christofascists, one has to wonder if American opinion will change as more and more citizens find themselves targeted for discrimination or see Christofascist views imposed upon them.  I for one hope that such is the case. The hate, division and extremism of religion has caused the death of millions and millions over the centuries - and such is still the case if one looks no farther than the Middle East.
Posted by Michael-in-Norfolk at Sunday, October 15, 2017