The GOP Is No Party for Honest, Honorable Men 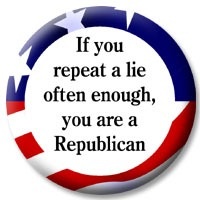 A column in the New York Times hits a home run in my view when it comes to looking at the rank dishonesty and moral bankruptcy of today's Republican Party. There was a time when the Republican Party prided itself on honesty, education, respect for science and honorable behavior.  That was the Republican Party of my grandparents and parents and even my days as a GOP committee member.  Now, neither I nor my ancestors simply would recognize today's Republican Party compared to what it once was.   What happened? As I have noted many times before, the defining change in the GOP took place when the evangelical Christians - the Christofascists, if you will - hijacked the party base.  Numerous studies have found that the Christofascists lie with abandon and take the view that anything that furthers their theocratic agenda is justified, including lying constantly and deliberately.

Now, that mentality permeates the Republican Party.  Donald Trump and Mike Pence personify this deliberate dishonesty. Sadly, many other Republicans, including Mitch McConnell and Paul Ryan have also embraced outright lying and dishonesty.  But the dishonesty is not limited to the Republican Party at the national level.  In the current Virginia election campaigns, all three of the Republican statewide candidates are lying  and know full well that they are lying.  Ed Gillespie whines about the cost of Confederate monument that will cut funds for public education, but totally ignores his proposed tax cuts that would leave Virginia with a 1.4 billion budget deficit which would be catastrophic to public education funding.  As long as the wealthy get a huge tax cut, trashing public education is perfectly fine with Gillespie.  GOP Attorney General candidate John Adams is no better than Gillespie.  It recent ads, Adams whines that Democrat Mark Herring is lying about him even though Herrings ads about Adams' shady clients is 100% accurate.  The same dishonesty plagues GOP Lt. Governor candidate Jill Vogel.  Like the leaders of Christofascist "family values" organizations, nowadays, if a Republican's lips are moving, the safest assumption is that they are lying.   Here are column highlights:

According to a new CBS News poll, almost 60 percent of the American public believes that the current Republican tax plan favors the wealthy. Some people see this number as a sign that the plan is in trouble; I see it as a sign that Republican lies are working far better than they deserve to.

For the plan does indeed favor the wealthy — overwhelmingly, undeniably. It’s shocking that as many as 40 percent of Americans don’t realize this.

It’s not difficult to see how the plan is tilted toward the very top. The main elements of the plan are a cut in top individual tax rates; a cut in corporate taxes; an end to the estate tax; and the creation of a big new loophole that will allow wealthy individuals to pretend that they are small businesses, and get a preferential tax rate. All of these overwhelmingly benefit the wealthy, mainly the top 1 percent.

There are also some measures affecting middle-class families, but they’re relatively small change — and some of them would actually raise taxes. Over all, the nonpartisan Tax Policy Center estimates that by 2027 almost 80 percent of the gains from the plan would go to the top 1 percent, just 12 percent of the gains to the middle 60 percent of Americans — and that more than a quarter of middle-class families would actually see their taxes go up.

The questions we should be asking instead are why Republicans are pushing this so hard, and how they can hope to get away with it.

Bear in mind that there is essentially no popular constituency demanding tax cuts for the rich. By a large margin, the general public wants to see taxes on corporations and the wealthy go up, not down; even Republicans are divided, with only a modest margin in favor of cuts.

Yet tax cuts for the rich are the overriding objective of the modern G.O.P. They were the principal motivation for the attempt to repeal the Affordable Care Act, since that would also mean repealing the high-income taxes that pay for it; from Republicans’ point of view, depriving millions of health care was just a minor side benefit. And now tax cuts for the wealthy are pretty much the only thing left on the G.O.P.’s legislative agenda.

In fact, it’s becoming increasingly clear that the hope for tax cuts is the main thing keeping congressional Republicans in line behind Donald Trump. They know he’s unfit for office, and many worry about his mental stability. But they’ll back him as long as they think he might get those tax cuts through.

So what’s behind this priority? Follow the money. Big donors are furious at missing out on the $700 billion in tax cuts that were supposed to come out of Obamacare repeal. If they don’t get big bucks out of tax “reform,” they might close their pocketbooks for the 2018 midterm elections.

[H]ow can an administration that pretends to be populist, to stand up for ordinary (white) working people, sell such elitist policies?

The answer is a strategy based entirely on lies. And I mean entirely: The Trump administration and its allies are lying about every aspect of their tax plan.

I’m not talking about dubious interpretations of evidence or misleading presentation of the facts — the kind of thing the Bush administration used to specialize in. I’m talking about flat-out, easily refuted lies, like the claim that America has the world’s highest taxes (among rich countries, we have close to the lowest), or the claim that estate taxes are a huge burden on small business (almost no small businesses pay any estate tax).

[C]an they really get away with this? A lot depends on how the news media handles it. If an administration spokesperson declares that up is down, will news reports simply say “so-and-so says up is down, but Democrats disagree,” or will they also report that up is not, in fact, down? I wish I were confident about the answer to that question.

One thing we know for sure, however, is that a great majority of Republican politicians know perfectly well that their party is lying about its tax plan — and every even halfway competent economist aligned with the party definitely understands what’s going on.

What this means is that everyone who goes along with this plan, or even remains silent in the face of the campaign of mass dissimulation, is complicit — is in effect an accomplice to the most dishonest political selling job in American history.

Do not fall for Republican lies at either the national level.  Instead, send a loud message to the GOP. Get out and vote a straigh Democrat ticket on November 7, 2017 - Ralph Northam for Governor, Mark Herring for Attorney General, and Justin Fairfax for Lt. Governor.  Then follow through and vote Democrat in the 2018 mid-term federal elections.