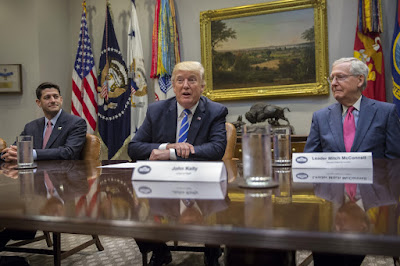 For years now the Republican Party has relied on its appeals to religious based bigotry and racism to convince many lower and middle class voters to vote against their own economic interests so that Republicans could pursue policies that best served the extremely wealthy.   With the GOP and Der Trumpenführer rolling out alleged "tax reform" that will shower the wealthy with huge tax cuts, we are witnessing the same phenomenon yet again.  Here in Virginia, GOP gubernatorial candidate Ed Gillespie is likewise promising tax cuts that will disproportionately benefit the wealthy and leave the state with a huge budget deficit.  This time around, Republicans are trotting out a number of lies to help them dupe voters into betraying their own best interest a column in the New York Times bu a Nobel Prize winning economist looks at the top 10 GOP lies about taxes at the moment.  Here are column excerpts (I have looked at the six lies, read the entire piece for the other three):

Modern conservatives have been lying about taxes pretty much from the beginning of their movement. Made-up sob stories about family farms broken up to pay inheritance taxes, magical claims about self-financing tax cuts, and so on go all the way back to the 1970s. But the selling of tax cuts under Trump has taken things to a whole new level, both in terms of the brazenness of the lies and their sheer number. Both the depth and the breadth of the dishonesty make it hard even for those of us who do this for a living to keep track.

I thought it might be useful, both for myself and for others, to put together a crib sheet: a fairly long-form description of ten big lies Trump and allies are telling, what they’ve said, and how we know that they are lies.

Lie #1: America is the most highly-taxed country in the world

This is a Trump special: he’s said it many, many times, most recently just this past week. Each time, fact-checkers have piled on to point out that it’s false.

Why does Trump keep repeating what even he has to know by now is a flat lie? I suspect it’s a power thing: he enjoys showing that he can lie repeatedly through his teeth, be caught red-handed in his lie again and again, and his followers will still believe him rather than the “fake news” media.

Lie #2: The estate tax is destroying farmers and truckers

Tales of struggling family farms disbanded because they can’t afford the taxes when the patriarch dies have flourished for decades, despite the absence of any examples. . . . . Lately Trump has added a new twist, portraying the estate tax as a terrible burden on hard-working truckers. For who among us doesn’t own an $11 million fleet of trucks?
[T]he Center on Budget and Policy Priorities shows, is that only a small number of very large estates pay any tax at all, and only a tiny fraction of those tax-paying estates are small businesses or family farms. . . . it seems quite possible that this year only 2 or 3 truckers and not a single farmer will pay any estate tax.

Lie #3: Taxation of pass-through entities is a burden on small business

Most businesses in the United States, at least for tax purposes, aren’t what we normally think of as corporations subject to profits taxes. Instead, they’re partnerships, sole proprietorships, and S corporations whose earnings are simply “passed through”: counted as part of their owners’ personal income and taxed accordingly. . . . Trump wants to change that, and let owners simply pay a 15 percent tax on the earnings of pass-through entities, with no further taxes owed.

The vast majority of Americans are in a tax bracket of 15 percent or less, so even if they control a pass-through entity, the Trump tax break is worth nothing to them . . . . High-income individuals, however, would gain a lot by paying 15 percent instead of the much higher rates they pay at the margin – 39.6 percent right now. And they’d also have a strong incentive to rearrange their affairs so that more of their income pops up in their pass-throughs. This wouldn’t be small-business creation; it wouldn’t add jobs; it would just be tax avoidance. That’s what happened when Kansas tried something similar, and played a big role in the state’s fiscal disaster.

Think about what happens if you cut the taxes on corporate profits. The immediate impact is that (duh) corporations have more money. Why would they spend that extra money on hiring more workers or increasing their wages?

Not, surely, out of the goodness of their hearts – and not in response to worker demands, because these days nobody cares what workers think.

Now, they might be inclined to invest more, increasing the demand for labor and therefore raising wages indirectly while competing pre-tax profits down. But there are a couple of major slippages in this story.

So for an extended period – at least 5 years, probably much more — cutting profits taxes is good for owners of corporations. Workers, not so much.

For tax reasons, corporations hold a lot of money in overseas tax shelters. Tax cutters always claim that lower rates and/or an amnesty will bring that money home and create a lot of jobs.

Those overseas accounts are just an accounting device, which have very little real effect. Many of the companies with big overseas hoards also have plenty of idle cash at home; what’s holding them back is a lack of perceived opportunities, not cash flow. And even those who don’t have surplus cash can easily borrow at near-record low interest rates; remember, they can always use the overseas cash to secure their loans.

And we have solid empirical evidence here. In 2004 the U.S. enacted the Homeland Investment Act, which offered a tax holiday for repatriation of foreign earnings by U.S. multinationals. Careful study of its effects tells us that

Repatriations did not lead to an increase in domestic investment, employment or R&D — even for the firms that lobbied for the tax holiday stating these intentions and for firms that appeared to be financially constrained. Instead, a $1 increase in repatriations was associated with an increase of almost $1 in payouts to shareholders.

Trump says it isn’t, so that’s that, right? Oh, wait.
Actually, if you look at the major provisions of the Unified Framework, the big items are (i) Cuts in corporate taxes (ii) Pass-through tax cut (iii) elimination of the estate tax (iv) cut in top marginal rate. All these strongly favor very high incomes – and everything else is small change. Hence the Tax Policy Center estimate: . . . . given the general shape of the plan there’s no way it can fail to be very much a gift to the already very rich.

Lie #7: It’s a big tax cut for the middle class

See Lie #6 above. All the big provisions benefit the rich, not the middle class. What’s left is mostly small change – and some of it, like ending deductibility of state and local taxes and other deductions, actually raises taxes on a substantial number of middle-class Americans.

In total, by 2027, according to TPC, 80 percent of the tax cut goes to the top 1 percent; only 12 percent to the middle three quintiles.

The take away? Trump and Republicans - including Ed Gillespie and his running mates - are playing their base for fools yet again.
Posted by Michael-in-Norfolk at Sunday, October 15, 2017