GOP Voter Suppression Laws May Have Won Wisconsin for Trump 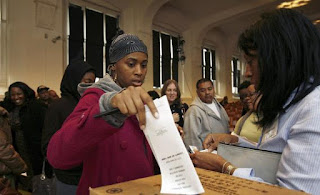 With their aging white, heterosexual, conservative Christian voter base literally dying off, Republican efforts around the country have shifted increasingly towards disenfranchising voters who they believe will vote against their agenda of tax cuts for the wealthy, special rights for Christofascists, emboldening white supremacists, and taking from the poor to give to the rich.  This effort takes many forms, but a favored method is to pass so-called voter ID laws under the guise of fighting non-existent voter fraud.  Other efforts include wrongfully purging voters from voter records and here in Virginia making it difficult for convicted felons who have served their time to regain their voting rights.  Hand in hand with this, of curse, is the disproportionate prosecution of minorities under Virginia's often very low threshold felony laws.  Now, a study suggests that these efforts bore fruit last year when Wisconsin's efforts to disenfranchise voters may have thrown Wisconsin to Trump.  A piece in New York Magazine looks at this disturbing situation which Republicans will no doubt seek to replicate in other states (Mother Jones also has coverage here).  Here are highlights:

Close elections almost by definition conjure up countless explanations of what might have changed the result. As the fine voting-rights journalist Ari Berman notes, one of the more shocking and significant developments on November 8, 2016, was Donald Trump’s win in Wisconsin, a state that had not gone Republican in a presidential election since the 49-state Reagan landslide of 1984. Explanations were all over the place. . . .

Virtually no one, says Berman, talked about voter suppression, even though Scott Walker’s hyperpolarized state had enacted and fought successfully to preserve one of the nation’s strictest voter ID laws, expected and designed to reduce minority turnout.

Yet there is evidence, both anecdotal and academic, that voter suppression efforts had a lot to do with a sharp reduction in minority and student voting in Wisconsin.

After the election, registered voters in Milwaukee County and Madison’s Dane County were surveyed about why they didn’t cast a ballot. Eleven percent cited the voter ID law and said they didn’t have an acceptable ID; of those, more than half said the law was the “main reason” they didn’t vote. According to the study’s author, University of Wisconsin-Madison political scientist Kenneth Mayer, that finding implies that between 12,000 and 23,000 registered voters in Madison and Milwaukee—and as many as 45,000 statewide—were deterred from voting by the ID law. “We have hard evidence there were tens of thousands of people who were unable to vote because of the voter ID law,” he says.

Trump carried the state by less than 23,000 votes.

Wisconsin’s voter ID law was designed to create complex hoops prospective voters had to jump through to secure an ID, particularly for those without driver’s licenses, and also for college students attending schools that did not issue the kind of IDs the law demanded. Berman found abundant evidence that election personnel in the state went beyond the letter of the law to discourage compliance.

And voter ID was just part of the arsenal of voter suppression techniques at the GOP’s disposal:

The voter ID law was one of 33 election changes passed in Wisconsin after Walker took office [in 2011], and it dovetailed with his signature push to dismantle unions, taking away his opponents’ most effective organizing tool. Wisconsin’s Legislature cut early voting from 30 days to 12, reduced early voting hours on nights and weekends, and restricted early voting to one location per county, hampering voters in large urban areas and sprawling rural ones. It also added new residency requirements for voter registration, eliminated staffers who led statewide registration drives, and made it harder to count absentee ballots.

It all added up, and for Republicans, it paid off handsomely in 2016.

One lesson of the Wisconsin saga is that control of the federal courts matters a great deal in vindicating voting rights and political representation; this is, after all, the state where a GOP gerrymander of the legislature was so overtly partisan that the U.S. Supreme Court may find it unconstitutional.

Republican-controlled statehouses have already passed more voting restrictions in 2017 than they did in 2016 and 2015 combined. Taken together, “there’s no doubt that these election changes affected the turnout among young voters, first-time voters, voters of color, and other members of the Obama coalition that overwhelmingly supported Hillary Clinton,” . . .

If you think of voting rights as a wonky “process” issue that’s less important than health care or the environment or avoiding war with North Korea, think again. It’s entirely possible we wouldn’t be dealing with a President Trump at all if voting rights were regarded as a fundamental right of citizenship that should be strongly and universally encouraged.

I only meet one of the GOP's preferred voter base of white, heterosexual, conservative Christians - Like author Anne Rice, I don't call myself Christian anymore given the hideousness that Christianity has taken on under the Christofascists.  What will the GOP try to come up with to disenfranchise people like me?  If Republicans win the Virginia statewide elections next month, expect a new wave of voter disenfranchisement in Virginia. Be very afraid. Get out and vote while you still can.
Posted by Michael-in-Norfolk at Friday, October 20, 2017