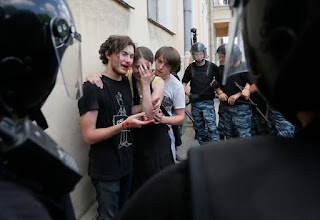 I generally do not view myself as paranoid, but if one looks at what is happening both here in America and around many places in the world, if one is LGBT, there is much to worry about.  Here in America the Trump/Pence regime is waging a relentless war against LGBT Americans and has already taken measures rolling back LGBT protections put in place by the Obama administration, has intervened in a case in the U.S. Court of Appeals for the 2nd Circuit arguing that existing federal civil rights laws do not apply to LGBT individuals and that gays can be fired at will, and had its representative to the United Nations recently voted against a U.N. Human Rights Council resolution that condemned the death penalty for those found guilty of committing consensual same-sex sexual acts.  Meanwhile, Betty Price, a member of the Georgia House of Representatives and wife of former Trump Health and Human Services Secretary Tom Price, asked this week whether the government could quarantine people with HIV to limit transmission of the virus that causes AIDS.  In doing so, Price parroted a long time talking point of Christofascist organizations - much like what the Nazis did toward Jews - that gays are diseased and pose a public health crisis.  In her ignorance, Price ignored the fact that the exploding HIV crisis now is among blacks, but then again the Trump regime and evangelical Christians do not like blacks anymore than they like gays.

Overseas, things are just as disturbing.   In Russia, that country's awful law that fines anyone expressing support for LGBT rights in public could get even harsher after a senior official in the Ministry of the Interior suggested making it a criminal offense.  A piece in the Washington Post lists other anti-LGBT efforts fueled by religious belief and opportunist politicians only too happy to scapegoat gays to divert attention from their failing policies.  Here are excerpts:

This week, a government journal in the former Soviet republic of Tajikistan announced that the country's interior ministry had compiled a registry of “proven” gays and lesbians. The list named 319 men and 48 women, whom Tajik federal prosecutors identified in operations they called “Morality” and “Purge.”

A purge — likely in the form of mass incarcerations — is exactly what human rights organizations are afraid will happen. But the phenomenon would not be unique to Tajikistan: Over the past few months, police in Egypt, Azerbaijan, Tanzania, Indonesia and the Russian republic of Chechnya have rounded up people suspected of being gay — and in many cases tortured or publicly humiliated them.

What's more, many of the crackdowns look like “copycats” of one another. “There are a lot of ways in which these crackdowns follow the same sequence of events,” said Kyle Knight, a researcher on LGBT rights at Human Rights Watch. “And there's reason to believe that what's happening in Tajikistan now is based on things their government there has learned from, say, what Azerbaijan just did.”

The sequence generally starts with someone — most likely a religious figure or government official — publicly denigrating acts of alleged sexual deviance. In countries where homosexuality is taboo and driven underground, such comments may be the first thing a person has heard in public about LGBT people. “It is easy to say that these particular people are spreading disease, that they are foreigners or sinners. From a starting point of ignorance, prejudice is an easy next step,” said Knight.

Then things get dangerous. . . . In most of the countries listed above, homosexuality is not illegal. But there also aren't any nondiscrimination laws that include sexuality. Without them, political leaders have to expend their own political capital to step in — assuming they think LGBT communities deserve protection at all. Instead, leaders usually side with the denunciations, or even calls for criminalization, and obscenity and prostitution laws are often turned against sexual minorities.  My colleagues in Jakarta, Moscow and Cairo have all recently documented that sequence.

In Azerbaijan, meanwhile, more than 80 people have been arrested since mid-September for suspected homosexuality.

The United Nations and Human Rights Watch have interviewed some of those arrested in Azerbaijian, who claim they were subjected to “electric shocks, beatings, forced shaving and other forms of humiliation to force them to incriminate themselves before being released,” according to a U.N. spokesman.

That torture and humiliation is reminiscent of what rights groups were hearing out of the Russian republic of Chechnya earlier this year. Roughly 100 people, mostly young men, were allegedly detained and mercilessly beaten as police attempted to force them to confess their homosexuality. This week, Maxim Lapunov became the first of them to lodge a formal complaint with Russia's Investigative Committee, which has previously dismissed allegations that any such “gay pogrom” ever took place.

Knight, of Human Rights Watch, said conditions are ripe for similar crackdowns in countries all over the world, pointing to Malaysia, Kyrgyzstan and Moldova as examples.

International out cry can push back against these horrific agendas.  Yet the United States in the age of Trump has signaled that it will not champion human rights for all even as it strives to give Christian extremist at home special rights to ignore non-discrimination and public accommodation laws. Here in Virginia, extremist GOP attorney general candidate John Adams has made it clear that he thinks religious belief should trump the Constitution's right of freedom of religion for those who are not right wing Christians.  It is indeed a worrisome time to be LGBT.
Posted by Michael-in-Norfolk at Saturday, October 21, 2017