Taking Down Trump for His Lies and Misogyny 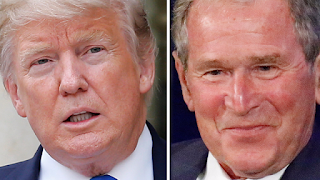 I am not fan of George W. Bush.  A search of this blog will reveal more posts than I can recall off hand taking Bush - who I referred to as the Chimperator - and Emperor Palpatine Cheney.  And yes, Bush's evil minion Karl Rove set the blue print for the general ugliness, homophobia and racism that Donald Trump with the apparent aid of Russians posing as Americans on social media took to  horrific new levels.  Yet despite all of this, Bush seems to have lacked the total lack of even a shred of empathy for others that is the norm for Der Trumpenführer.  Similarly, although in my view in way over his head and far too deferential to Cheney, Bush seems to have lacked the viciousness and cruelty that are also the norm for Trump.  A piece in the Washington Post (and numerous other legitimate news outlets) looks at Bush's denunciation of Trumpism and the hate and white supremacy that define the Trump/Pence regime and its base.  Here are excerpts:

For the past nine years, George W. Bush has largely stayed out of presidential politics; he declined to criticize his successor, Barack Obama, and he chose not to endorse but largely ignored President Trump. While Mitt Romney and others spoke out publicly against Trump, Bush stayed above the fray.

That changed in a big way Thursday.

Speaking at a George W. Bush Institute event in New York, Bush didn't use Trump's name, but his target became clearer as the speech progressed. Here's a sampling:

[A]lmost each of these quotes has some connection to Trump. “Conspiracy theories and fabrications?” Check and check. “Nationalism and nativism?” Check. A “degraded discourse?” Big check. “Bigotry and white supremacy?” Trump was criticized for not calling them out strongly enough in Charlottesville. “Bullying?” Huge check. Not “living up to civic values?”

On Thursday, Bush clearly decided that silence was no longer tenable.

Meanwhile, another column in the Post looks at Trump's lying and ties the pattern to one of the biggest liars, propagandists and sociopaths in history: Adolph Hitler.  Trump may not be another Hitler, but his pattern of lying and attacking the free press do bear frightening similarities to what Hitler did in the late 1920's and early 1930's via a campaign of lies.  Here are column excerpts:

It is a commonly accepted rule among those who are in the business of argument, especially online, that he or she who invokes Adolf Hitler, either in oratory or essays, automatically forfeits the argument.

The reference is deemed far too extreme, too explosive, too far beyond rational correlation. No matter how bad a present-day politician, not one of them has charted or is charting a course to exterminate millions of innocent people as an act of ethnic cleansing.
Hitler stands alone in this regard, without rival, a warning to the world about how evil and lethal human beings can be, a warning that what he did can never be allowed again.

That said, there are strategies that Hitler used to secure power and rise — things that allowed his murderous reign — that can teach us about political theory and practice. And very reasonable and sage comparisons can be drawn between Hitler’s strategies and those of others.

One of those lessons is about how purposeful lying can be effectively used as propaganda. The forthcoming comparison isn’t to Hitler the murderer, but to Hitler the liar.

According to James Murphy’s translation of Hitler’s “Mein Kampf”:

“In the big lie there is always a certain force of credibility; because the broad masses of a nation are always more easily corrupted in the deeper strata of their emotional nature than consciously or voluntarily; and thus in the primitive simplicity of their minds they more readily fall victims to the big lie than the small lie, since they themselves often tell small lies in little matters but would be ashamed to resort to large-scale falsehoods.”

“It would never come into their heads to fabricate colossal untruths, and they would not believe that others could have the impudence to distort the truth so infamously. Even though the facts which prove this to be so may be brought clearly to their minds, they will still doubt and waver and will continue to think that there may be some other explanation. For the grossly impudent lie always leaves traces behind it, even after it has been nailed down, a fact which is known to all expert liars in this world and to all who conspire together in the art of lying.”

This demonstrates a precise understanding of human psychology, but also the dangerously manipulative nature that operates in the mind of a demon.

And yet, as many have noted, no person of sound reason or even cursory political awareness can read this and not be immediately struck by how similar this strategy of lying is to Donald Trump’s seeming strategy of lying: Tell a lie bigger than people think a lie can be, thereby forcing their brains to seek truth in it, or vest some faith in it, even after no proof can be found.

Trump is no Hitler, but the way he has manipulated the American people with outrageous lies, stacked one on top of the other, has an eerie historical resonance. Demagogy has a fixed design.

Just this week, Trump told the colossal lie that “President Obama and other presidents, most of them didn’t make calls” to the families of fallen soldiers.

When called out about this lie, he quickly retreated to one of his shield phrases: “That’s what I was told.”

This is not a simple fear of the truth; it is a weaponizing of untruth. It is the use of the lie to assault and subdue. It is Trump doing to political ends what Hitler did to more brutal ends: using mass deception as masterful propaganda.

Maybe I have crossed the ink-stained line of the essay writer, where Hitler is always beyond it. But I don’t think so. Ignoring what one of history’s greatest examples of lying has to teach us about current examples of lying, particularly lying by the “president” of the most powerful country in the world, seems to me an act of timidity in a time of terror. It is an intentional self-blinding to avoid offending frail sensibilities.

I do not believe the column author crossed the line. History has many lessons to offer if we are but willing to see the truth and ignores the calls of  sycophants of evil doers that one has gone to far or is being overly dramatic.  As one who has read a great deal about the rise of Hitler, one lesson is to never believe that evil cannot happen.  All it needs is a complacent and non-engaged populous.
Posted by Michael-in-Norfolk at Friday, October 20, 2017