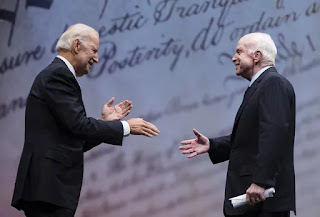 Sadly, many Republicans refuse to recognize that the betrayed America's core values when they voted for the Donald Trump/Mike Pence ticket almost a year ago.  Honesty, decency, a respect for the rule of law and the rights of all citizens were thrown on the trash heap by Trump supporters.  The ravings of a malignant narcissist via Twitter are now a daily occurrence.  Meanwhile, Pence is pushing a theocratic agenda that exalts the rights of Christian extremists while denigrating the rights of religious freedom for everyone else.  Ignorance is embraced, science and objective fact are rejected, and America no longer is respected and looked up to by the rest of the world. Traveling in the United Kingdom, the husband and I experienced just how low America has fallen with an unfit madman in the White House.  A few Republicans are speaking out and belatedly resisting the ugliness that is Trumpism.  John McCain, who admittedly has made his share of mistakes over the years, including picking the idiot of Wasilla, Sarah Palin as his VP running mate, is one such Republican.  As the Washington Post reports McCain and other true patriots are forming alliances to resist the evil that is the Trump/Pence regime.  Here are story highlights:

John McCain and Joe Biden have been on opposite sides of many crucial national security debates over the past 30 years.

From Iraq to Afghanistan to Syria, the Arizona Republican and the Delaware Democrat clashed over the scope of the American military mission and the efficacy of reaching for diplomatic resolutions for these war-torn nations. They maintained a genuine friendship through 22 years of service together in the Senate and then Biden’s eight years as vice president. Yet theirs was a fierce, principled rivalry.

On Monday night, in the cradle of liberty, those disputes disappeared as Biden presented the Liberty Medal to McCain at the National Constitution Center, a nonprofit organization that touts bipartisanship and sits across the street from Independence Hall.

Another reality has also brought them together: President Trump, whose global outlook has helped crystallize just how closely aligned these two elder statesmen really are.

“We believed in our country, and in our country’s indispensability to international peace and stability and to the progress of humanity,” McCain said, growing unusually emotional at times during the address.

McCain pivoted into a full-frontal attack on those who “refuse the obligations of international leadership and our duty to remain ‘the last, best hope of earth’ for the sake of some half-baked, spurious nationalism.” He did not mention Trump by name, but the implication was clear, and it brought a standing ovation from a crowd that included Democratic and Republican members of Congress from the region.

Now, McCain and Biden are on the same side, battling the isolationism that Trump has avowed and that has been most clearly articulated by his onetime chief strategist, Stephen K. Bannon.

In his first nine months in office, Trump has withdrawn the United States from a Pacific Rim trade deal, the Paris climate accords and a cultural organization at the United Nations, while also signaling opposition to the Iran nuclear deal and new sanctions against Moscow.

[O]verall they reveal Trump’s broad intention to live up to his “America First” presidential campaign of 2016 — a repudiation of all that McCain and Biden have pressed for 40 years.

The speech prompted the president [Trump] to issue an immediate threat: “People have to be careful because at some point, I fight back,” Trump said in an interview Tuesday with WMAL, a D.C. radio station.

McCain wiped away tears as Biden spoke of his son’s adoration for the Arizona senator, a symbolic forging of their alliance. They will, for now, set aside their old disputes on how to engage the world and instead take up a mutual fight against those who want to withdraw from global leadership.

Biden read from an old McCain speech to sum up the new approach, saying that the United States should always be an “international beacon of liberty and a defender of the dignity of all human beings, and the right to freedom and justice.”  “That’s what it’s always been for four decades,” Biden said.

Yes, you noted correctly that I will not give Trump the title of president.  He's NOT my president and is the antithesis of what a president - or any decent human being - should be. Kudos to McCain and Biden.