Quote of the Day: Andrew Sullivan on the GOP and Gays 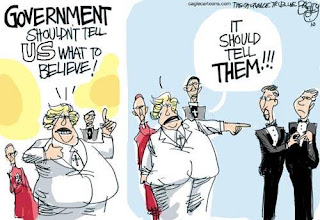 The contempt of today's Republican Party is palpable and it seems that there is no limit to the measures the party will endorse in its effort to demean and demonize LGBT Americans. In commenting on Newt Gingrich's response to Scott Arnold, a university professor and Iowa voter, to go vote for Obama, Andrew Sullivan summed things up wonderfully:

I wasn't there and cannot verify this. But it qualifies as a Kinsley gaffe, in as much as the GOP does not merely have no outreach to gays, but actively promotes candidates who seek our disappearance from the face of the earth through "reparative therapy", whose supporters boo openly gay servicemembers in public, who wish to amend the federal Constitution to deny us core civil rights, who find a defense of gay people from violence and persecution abroad to be against "American values", and who back every hate crime laws but those that protect gays from violence.

In another post, Andrew went on to speculate as to whether the GOP is near the point of imploding (we can only hope). Here's his apt question:

The House Republicans have now all but guaranteed that taxes will go up on middle-class Americans because of what they themselves have called "high stakes poker." And this moment may as well sum up why Americans despise this Congress as deeply as they do.

For the GOP to vote down sustaining a tax cut - after a huge majority in the Senate and president had both signed off - and to stalk off into the Christmas vacation leaving a struggling workforce in the lurch ... well, it's a novel form of politicking, don't you think?

If you wonder why Obama is slowly rising again, I'd look less to his own smart re-framing of the issues than to the utter fecklessness of the opposition party. The circus of the primaries and the farce of the House will not leave the public consciousness very soon.

Posted by Michael-in-Norfolk at Wednesday, December 21, 2011