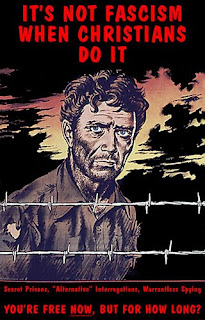 I've long maintained that the Christianists - a term that in my view increasingly includes ultra-far right Catholics - want free rein to denigrate LGBT students and view "freedom of religion" as meaning they have a right to inflict their religious views on everyone else in society. It's an extremely selfish and self-centered mindset that sees the U.S. Constitution as something that is their personal property that is to be denied to everyone else. The disingenuous "religious liberty" meme is the latest effort to disguise this Christianist hatred of others with a cloak of respectability. A lawsuit launched by the far right Thomas More Law Center on behalf of a Catholic mothers whose son was dismissed from class for spouting anti-gay beliefs is an example of this effort. It's an effort that needs to be defeated and a message needs to be sent that religious freedom does not include the right to persecute other citizens. Here are highlights from Think Progress on the lawsuit:

On October 20, 2010, Howell High School teacher Jay McDowell asked a student to leave his classroom for expressing his religious view that he does not accept homosexuality or condone homosexual acts. Now, the student’s mother, Sandra Glowacki, is suing the teacher and district for violating her son’s constitutional rights. But the lawsuit brought by the Thomas More Law Center on her behalf suggests more of a crusade against all anti-bullying policies, calling them “indoctrination” that is “hostile toward religious opposition to homosexuality.”

The incident took place on Spirit Day, a day on which teachers and students wear purple to remember those who committed suicide after experiencing relentless bullying. The lawsuit calls Spirit Day “a day in which activists exploit the tragic suicidal deaths of homosexual teenagers to promote acceptance of homosexuality in the public schools,”

The purpose of the “anti-bullying” day, the “Tyler’s Army” t-shirts, and the movie was to indoctrinate students into believing that homosexuality is normal and to shift the blame for the destructive lifestyle of homosexuals to those who believe it is wrong and immoral. In particular, the purpose is to make those who oppose homosexuality on moral and religious grounds to feel guilty for holding those beliefs and to portray those beliefs as intolerant, harmful, hateful, and destructive. In sum, the purpose of the “anti-bullying” campaign, which is sponsored, promoted, and endorsed by the NEA, the MEA, the HEA, GLAAD, and the School District, is to shift the blame, guilt, and shame felt by homosexuals onto those who oppose homosexuality on moral and religious grounds.

The suit does nothing to sugarcoat the anti-gay Catholic beliefs Glowacki instilled in her children, calling homosexual acts “acts of grave depravity,” “intrinsically disordered,” and “contrary to the natural law,” and “under no circumstances can they be approved.” . . . . it goes on to suggest that any policy that tries to limit anti-gay speech or favor pro-gay speech is a violation of the Fourteenth Amendment’s Equal Protection Clause.

Ultimately, this suit seems to have little to do with the student’s rights. Rather, Thomas More Law Center is using this opportunity to demand that it be perfectly okay to condemn, ostracize, bully, and harass students for their sexual orientation, the consequences be damned.

Posted by Michael-in-Norfolk at Monday, December 19, 2011