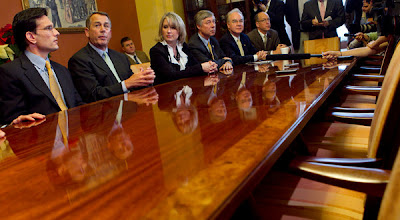 Bowing to withering attacks fro Democrats and Senate Republicans, the delusional GOP members of the House of Representatives has capitulated to an extension of the payroll tax reduction for a mere two months. It's not the extension that was needed to help the middle class or to continue to stimulate consumer spending. Playing a large roll in the anti-middle class element of the GOP House membership was Virginia's always despicable Eric Cantor (at far left in the photo above) who never seems to miss a chance to aid the wealthy while kicking average Americans to the curb. What's ironic is that with only a two month extension, the GOP has set the stage for a repeat disaster even closer to the 2012 elections. Charles Krauthammer - not exactly someone I often agree with - does a good job at summing up the disaster that the GOP ultimately visited on itself in a column in the Washington Post:

Now that Congress has reached agreement on what must be one of the worst pieces of legislation in years — the temporary payroll tax holiday extension — let’s survey the damage.

To begin with, what even minimally rational government enacts payroll tax relief for just two months? As a matter of practicality alone, it makes no sense. The National Payroll Reporting Consortium, representing those who process paychecks, said of the two-month extension passed by the Senate just days before the new year: “There is insufficient lead time to accommodate the proposal,” because “many payroll systems are not likely to be able to make such a substantial programming change before January or even February,” thereby creating “substantial problems, confusion and costs.”

[W]hat were they thinking in the first place? What business operates two months at a time? The minimal time horizon for business is the quarter — three months. What genius came up with two?

The tax-holiday extension — presumably to be negotiated next year into a 12-month extension — is the perfect campaign ploy: an election-year bribe that has the additional virtue of seizing the tax issue for the Democrats.

The House Republicans’ initial rejection of this two-month extension was therefore correct on principle and on policy. But this was absolutely the wrong place, the wrong time, to plant the flag. Once Senate Republicans overwhelmingly backed the temporary extension, that part of the fight was lost. Opposing it became kamikaze politics.

Note the toll it is already taking on Republicans. For three decades Republicans owned the tax issue. . . . . The Democrats set a trap and the Republicans walked right into it. By rejecting an ostensibly bipartisan “compromise,” the Republican House was portrayed as obstructionist and, even worse, heartless — willing to raise taxes on the middle class while resolutely opposing any tax increases on the rich. House Republicans compounded this debacle by begging the Senate to come back and renegotiate the issue, thus entirely conceding the initiative to Majority Leader Harry Reid.

Having finally realized they had trapped themselves, House Republicans quickly caved, with help from a fig leaf contrived by Sen. Mitch McConnell. The GOP’s performance nicely reprises that scene in “Animal House” where the marching band turns into a blind alley and row after row of plumed morons plows into a brick wall, crumbling to the ground in an unceremonious heap. With one difference: House Republicans are unplumed.

Ouch!! Sometimes the truth hurts and sometimes it's best not to allow one selves to be ruled by the most ignorant and delusional elements in the GOP. Will the House GOP learn from this mess? I hope not.
Posted by Michael-in-Norfolk at Thursday, December 22, 2011