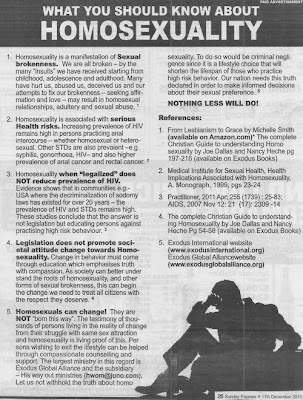 Few things make my blood boil like the deliberate lies promulgated by "ex-gay" organizations such as Exodus International - which has published the ad set out above in newspapers in Jamaica and Trina dad - and its Christianist hate group financial backers. Despite the staggering medical/mental health evidence that debunks and outright condemns "ex-gay" change "ministries" and reparative therapy as false and even harmful, these organizations continue to knowingly and deliberately disseminate lies. What's even more distressing is that they are increasingly preying upon ignorant and relatively uneducated populations overseas as targets of their lies and falsehoods as the market for such trash diminishes in America. Candidly, the "ex-gays" for pay at Exodus and a host of similar Christianist financed "ex-gay" ministries make the most vile and nasty prostitutes look down right virtuous and upstanding in comparison. Sadly, these "ex-gays" - many of who have been subjected to fraudulent religious based brainwashing and/or were total dysfunctional losers in life before becoming "ex-gay" whores - have been cynically used by their "godly Christian" paymasters.

As for the Christianists who fund these fraudulent organizations are even worse than the "ex-gay" whores they support financially. They either support these bogus programs for political purposes or because they are so mentally damaged by their religious indoctrination that they cannot accept that the Bible is wrong on the issue of homosexuality - I'd go so far as to describe them as suffering from a form of mental illness - that they will spread all kinds of hatred and slanderous information about LGBT individuals.

The sooner that organizations like Exodus are stomped out of existence and exposed for the frauds and liars that they are, the better off the world will be. I began my activist journey helping to expose "ex-gay" poster boy Michael Johnston as a total fraud back in 2003 and I continue to believe that ending the "ex-gay" myth is vital to securing full equality for LGBT individuals. Think Progress commented on the ad as follows:

A full-page ad promoting ex-gay therapy has appeared in the leading Trinidad newspaper Sunday Express, titled “What You Should Know About Homosexuality.” A similar advertisement was also recently published in a Jamaican newspaper, LGBTQ Nation reports. As one equality activist put it, “They looked at this…and thought it was okay to publish? Not that something is wrong with publishing a religiously slanted ad, but one that openly discredits a community, questions their movement towards rights and even, in a sense, undermines their actual existence is definitely a problem.”

I continue to support a total boycott of nations like Jamaica where the government continues to support the kind of lies, hatred and outright bullshit that are the norm with Exodus and which are embodied in this ad. I would encourage readers to contact the Jamaica Tourism Board and make it clear that as long as homophobia is official policy, your tourist dollars will go elsewhere and that in addition you will encourage everyone you know to boycott the island as well. Here is where where you can send a message to the Jamaica Tourist Board: http://www.visitjamaica.com/contact-us.aspx. A similar message can be sent to the Trinidad tourism bureau here.

The other thing that needs to happen is that the American Psychological Association needs to become aggressive and push state licensing agencies to revoke the licenses of therapist who engage in this kind of bogus quackery - and yes, I do mean Minnesota among other states. Similarly, states need to shut down "Christian counseling" clinics if they don't meet state licensing requirments. Lastly, we need to see more victims of "ex-gay" ministries and/or their families suing these for the harm that they do.
Posted by Michael-in-Norfolk at Tuesday, December 20, 2011