Gingrich: 'Activist Judges' Should Be Arrested 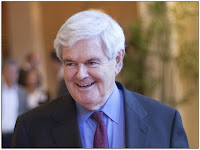 The batshitery that Newt Gingrich is willing to vent in his non-stop effort to utterly prostitute himself to the Christianist elements who would overthrow the U.S. Constitution if possible seems to know no limits. In Gingrich's latest episode of diarrhea of the mouth, Gingrich has espoused the desire to arrest "activist judges." Of course, Gingrich and his puppeteers from the Kool-Aid drinking set would take it upon themselves to define "activist." Personally, if Gingrich wants to arrest activist judges, he can start the process with Supreme Court justices Clarence Thomas and Antonin Scalia who are trashing the U. S. Constitution in an effort to enshrine their personal religious beliefs and bigotries into the law. The only good news is that even as Gingrich becomes more of a tawdry whore, his poll numbers have been dropping. Here are highlights from ABC News on Gingrich's desire to undermine the federal judiciary:

Presidential candidate and former House Speaker Newt Gingrich suggested today that he would have the Capitol Police or U.S. Marshals arrest activist judges, citing an incident in which a sitting federal judge ordered students not use the word "benediction" in their high school graduation.

Gingrich, who currently leads the polls in the field vying for the Republican nomination, made the suggestion in response to a hypothetical scenario posed on CBS's "Face the Nation."

"If you had to, or you'd instruct the Justice Department to send a U.S. Marshall," he said. "Let's take the case of Judge Biery. I think he should be asked to explain a position that radical."

U.S. District Judge Fred Biery received harsh scrutiny from many in June for a ruling barring religious speech during the high school graduation ceremony at Medina Valley Independent School District in Texas. The ruling was quickly overturned by a federal appeals court, but Gingrich used the incident to launch a greater assault on what he said is a judiciary out of touch with mainstream values.

Gingrich also cited "The Federalist Papers" today to make his case for weakening the judicial branch.

"The constitution promises a balance of the judicial branch, executive branch and legislative branch," he said. "'The Federalist Papers' say specifically the weakest of the three branches is the judiciary. [Thomas] Jefferson abolishes 18 out of 35 federal judges."

Judges do not have the power to write new laws but are often criticized for overturning old laws or enacting new policy when lawsuits are successfully argued in court.

But in contrast to his hard-line position on judicial activism, Gingrich said he does not believe that all illegal immigrants should be arrested en mass. "I do not believe the American people are going to send police out to round up folks who have been here 25 years," Gingrich said.

Posted by Michael-in-Norfolk at Monday, December 19, 2011