Gays Happier and Healthier Where Gay Marriage Is Legal 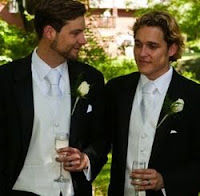 I referenced a report from a new study in passing on the correlation between gay males leading healthier and happier lives in states where same sex marriage is legal. The savings in health care costs and benefits to human capital in general should make anyone truly concerned about run away health care costs reconsider banning gay marriage. Of course, the Christianists and their boot licking whores in the GOP will not do so since the Christianists' goal is to make life as much of a living Hell for gays as possible since we dare to reject their fear and hate based (emphasis on hate) religious beliefs. But if anti-gay Republicans were true to the supposed conservative economic beliefs and desire for social stability, they would support same sex marriage which is actually a conservative social approach by these measurements. An article in LGBTQ Nation looks at the study and here are some highlights:

Gay men who live in U.S. states where same-sex marriage is legal make fewer doctor visits, have lower healthcare costs, and in general lead happier and healthier lives, according to a new study being published in the American Journal of Public Health.

The researchers surveyed the demand for medical and mental healthcare from more than 1,200 gay men registered with a Massachusetts health clinic in the 12 months prior to the 2003 change and the 12 months afterwards and found a 13-percent drop in healthcare visits after the law was enacted.

This was regardless of whether the men were in a stable relationship, the American Journal of Public Health reported.

There was a reduction in blood pressure problems, depression and “adjustment disorders,” which could be the result of reduced stress, researchers said.

A spokesman for the Terrence Higgins Trust, a UK-based sexual health and HIV charity, told the BBC that “there is a known link between health and happiness.”

“It’s no surprise that people who are treated as second class citizens tend to have low self esteem, which in turn makes them more likely to take risks,” the spokesman said. “Whether this is drugs, alcohol abuse, or unsafe sex, treating gay men unequally has lasting repercussions for their health.”

More coverage on the study findings can be found here in the American Journal of Public Health. I especially like this policy finding that anyone honest about reducing health care costs ought to embrace:

Conclusions. Policies that confer protections to same-sex couples may be effective in reducing health care use and costs among sexual minority men.

I continue to believe that Christianists hate gays intensely because we - like evolution - represent a huge threat to their house of cards religious belief system that is based on a selective reading of an increasing factually and scientific unreliable document: the Bible. If the Bible is wrong about the creation story, wrong about the existence of Adam and Eve and wrong about its condemnation of same sex relationships, the entire house of cards collapses and the fear stricken Christianists are left with nothing. Worse yet, many will be faced with the realization that they led their lives based on a lie. They will go to any lengths to avoid facing this truth - including seeking vengeance on those whose lives and loves underscore the falsity of their belief system.
Posted by Michael-in-Norfolk at Wednesday, December 21, 2011

Let us have a family just as you do: http://www.petitiononlineaustralia.com/petition/legalise-same-sex-marriage/423