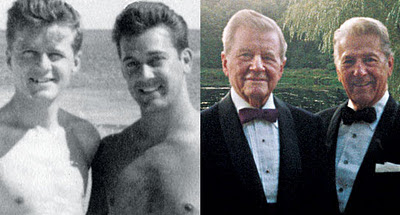 The Christianists like to depict gays as promiscuous, commitment avoiding alcoholics and drug users. I guess they're looking in the mirror - or at least if they are evangelicals enamored with Newt Gingrich. The reality nowadays is quite different than the malicious image our enemies like to disseminate and candidly, most of our friends are in committed relationships or are seeking one. A case in point is a finally happily married couple from New York, John Spofford Morgan and Louis Halsey, who have finally married after being together for 64 years - a period eons longer I might add than any of Gingrich three marriages. New York magazine looks at this couple and the happy event now that marriage equality has swept into New York State. Here are some highlights:

When the Columbia Library closed each night at ten, it was the custom of John Spofford Morgan, who was studying for a master’s in international affairs, to hop on the subway and head downtown to the New Verdi on West 72nd. Back then, there were two kinds of bars for gay men, he says: pickup joints and old-friends joints. The New Verdi was the latter, but it turned into the former when at around 10:30 on May 17, 1947, Louis Halsey walked in. “Love at first sight,” says Lou now. “Was it?” John wonders. “For me it was slower.” In any case, Lou and John spent the night together, just as they have spent most nights in the 64 years ensuing. Last month, they got married.


John is 94, recovering from a broken hip but otherwise as hale and handsome as Lou, 88, says he always was. One snapshot shows the pair on a beach in Beirut in 1952. Lou looks like Tony Curtis, glossy and pompadoured. John looks like JFK except, as his mother used to complain when people compared their families, “we have chins.”

Both served in the Navy in World War II, but on different oceans, as in a way they were from different worlds on land. John, who still speaks in the accent of the turn-of-the-twentieth-­century elite, worked as an economist. Lou, of Hungarian-immigrant stock, cut hair for decades at the Westbury Hotel.

[B]eing gay was a great equalizer then. And being married is a great equalizer now. “People say, ‘So if you’re married, where’s the certificate?’ ” Lou explains. “Now we have it.” The pair ignored domestic partnership when it came along (“A halfway step,” says John), and since they had already invested in the complicated legal work-arounds—trusts, powers of attorney—needed to protect one another, they didn’t see the point of claiming marriage rights in, say, Iowa. But when the law passed here in June, they knew they would take the step.

The small ceremony, with a minister and three witnesses, was held in their Village apartment on November 11, a date they chose because they have for years noticed the time 11:11 on the clock by the bed. They did not exchange rings and got no gifts, “except bourbon!” Lou says. “But he”—he waves at John—“started to cry.”

I wish them both happiness. And I wish folks like that self-enriching whore Maggie Gallagher would take a good look at the harm they are doing by trying to deprive couples like this one from equality under the CIVIL marriage laws. Gallagher and those like her are truly horrible human beings.
Posted by Michael-in-Norfolk at Tuesday, December 20, 2011