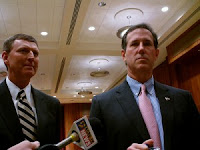 While displaying how much one hates LGBT citizens seems to be the sport of choice among the GOP presidential candidates, few take they level of hate and contempt for us to the level of Rick "Frothy Mix" Santorum. Indeed, the principal pillars of Santorum's ridiculous campaign are whining about "family values" and how much he'd like to criminalize and punish gay Americans. Thus, it's no surprise that the virulently anti-gay FAMiLY Leader’s Bob Vander Plaats and Chuck Hurley of the Iowa Family Policy Center have both endorsed Santorum. The good news is that even among the Kool-Aid drinkers of the Iowa GOP, a significant majority see Santorum as unacceptable as the GOP standard bearer in 2012. This reality, of course, will not stop Santorum from remaining on the campaign trail for the time being, bashing gays wherever he goes. Here are some highlights from Think Progress on Santorum's endorsement by two of Iowa's leading hate merchants:

The FAMiLY Leader’s Bob Vander Plaats and Chuck Hurley of the Iowa Family Policy Center have endorsed conservative values stalwart Rick Santorum for president, who, despite a strong record of opposing abortion rights and marriage equality, has failed to gain any significant traction in the state. Santorum is also the only GOP presidential candidate to campaign in all 99 of Iowa’s counties and has participated in over 350 town halls. The Leader’s board has agreed to remain neutral in the caucuses.

Vander Plaats and his group have sought to position themselves as kingmakers of the Iowa caucuses, hosting a presidential speakers forum earlier this year, and asking candidates to sign a 14-point marriage fidelity pledge vowing to oppose same-sex marriage. During today’s announcement Vander Plaats downplayed the influence of his personal endorsement, saying that the endorsement may have limited value, given the proximity of the Jan. 3 caucuses:

VANDER PLAATS: He has been a stalwart and a soldier for the sanctity of human life and God’s design for the family, one man-one woman marriage…. So today, I as an individual am going to endorse Rick Santorum. I’m going to mobilize whatever resources I have at my disposal to advocate for him. I will not tear down another candidate….I believe Rick Santorum comes from us. He comes from us, not just to us. He’s one of us….I also recognize that we’re down to fourteen days minus Christmas.

A Gallup poll released several weeks ago found that Santorum — a candidate who has camped out in Iowa and delivered every bigoted anti-gay argument imaginable — is the least acceptable nominee for president from the Republican Party — according to Republicans. Just 27 percent of GOP voters said Santorum could represent the party in 2012; 62 percent said he was “not acceptable.”

The FAMiLY Leader has its own long history of anti-gay and anti-Muslim rhetoric. An early version of the group’s fidelity pledge suggested that children were better off under slavery than they are under Obama, and the document likens homosexuality to polygamy, adultery, or polyandry, attacks gays as a public health risk, and foments the non-existent “Sharia” threat to America.

Given the foulness of his endorsers, one can only assume that Santorum will now seek the endorsement of the KKK and Neo-Nazi groups.
Posted by Michael-in-Norfolk at Wednesday, December 21, 2011