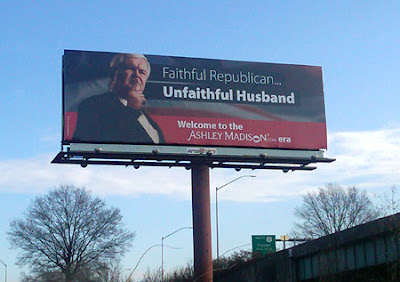 In the "too funny" category is the news that Ashleymadison.com, a dating website for people looking to cheat on their spouses, has endorsed thrice married, serial adulterer for the GOP nomination. What better role model for the group than Gingrich who has repeatedly illustrated his contempt for the sanctity of marriage through his adulterous affairs and two divorces. Somehow, I find his conversion to Catholicism and supposed faithfulness a bit hard to swallow. Think Progess has this on the endorsement:

A website that promotes adultery has endorsed Newt Gingrich for president, and even erected a giant billboard in Pennsylvania to announce it. Next to a picture of Gingrich making a “shh” gesture, the billboard reads: “Faithful Republican, Unfaithful Husband.” Ashleymadison.com, a dating website for people looking to cheat on their spouses, welcomes visitors with the tag line, “Life is short, Have an affair.” Gingrich has admitted to cheating on his wives, and Noel Biderman, the founder of the cheaters website explained, “Now that Newt is the leading contender in the race for the GOP nomination, we felt compelled to make a point to illustrate how times have changed when a serial divorcee/adulterer is capturing the hearts of the American people.”

I love it. It sums up the hypocrisy and false piety of both Gingrich and the evangelical Christian crowd which data has shown have the highest divorce rate among religious voters.
Posted by Michael-in-Norfolk at Tuesday, December 20, 2011