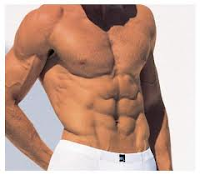 The boyfriend and I were recently at a largely gay holiday party and in the course of a discussion with an older straight woman she remarked how the men at the party were overall so much better groomed that what she was used to seeing at parties with large numbers of straight men. She said she wished more men paid as much attention to grooming as gay men. Obviously, she had not frequented many "bear" parties or else here comments might have had some caveats. But, she seems to be onto something in terms of straight men learning a think or two from the gays. At least in terms of the growing "manscaping" boom among heterosexual men. Here are highlights from an article that looks at the trend:

The Atlantic reported this month that female pubic hair in America is on the road to extinction, but that’s a bit like noting the spotted owl is an endangered species. Grooming and waxing experts say the latest trend in pubic hair removal isn’t targeted at women—it’s for the guys. There’s evidence of this all around us (if you dare to look). . . . . The same is true of other celebrities’ trimmed full-monty shots, from football player Brett Favre to Fall Out Boy Pete Wentz.

In ancient times, removing male pubic hair had less to do with aesthetics. Egyptians did it to stave off fleas and lice. Romans removed adolescent boys’ body hair as an initiation into adulthood. In the 16th century, Europeans were aghast when Michelangelo’s statue of David featured a sculpted tuft above his penis; they thought it looked ungodly. The modern manscaped man is a product of today’s post-mextrosexual society, where even the alpha male indulges in spa treatments and $50 Diesel boxer briefs.

“Part of it has to do with shared roles,” says Nicole Caldwell, the editor of Playgirl, who has seen such a steep decline in male pubic hair recently that she has to remind her models not to shave everything off. “I don’t want to say there’s no distinction between men and women, but it’s more acceptable for them to share a space. Guys can occupy salons and it’s not totally bizarre.”

While little scientific research exists on male hair-removal habits, a 2008 study conducted by researchers at Flinders University in Australia concluded that “hairlessness is rapidly becoming a component of the ideal male body.” Of the 228 heterosexual males who participated in the anonymous survey, 66 percent said they had removed their pubic hair at least once, in comparison to 82 percent of homosexual males.

Manscaping has gone so mainstream that stores like Kohls and Bed, Bath & Beyond stock body trimmers right next to facial ones. “The Mangroomer Private Body Shaver is one of our best-selling products,” says Mike Gilman, co-owner of the Grooming Lounge in Washington D.C., an upscale Barber Shop that serves scotch to its clients. Brian Boye, GQ’s grooming editor, agrees that body-grooming products have flooded the men’s market in recent years.

For those seeking a silky smooth undercarriage, there’s always the waxing option. In London, the Strip: Ministry of Waxing reports that one out of every three male customers requests a “Boyzilian.”

Martha Frankel, who co-wrote Brazilian Sexy with Janea Padilha, one of the founding members at Manhattan’s infamous J Sisters salon, is bowled over by the manscaping boom. According to Frankel, waxing used to be a strictly gay phenomenon, particularly in Brazil, where gay men strolled the beach in barely-there banana hammocks. Today, she hasn’t come across a single straight guy under 25 who doesn’t trim, shave or wax.

The study cited in the article can be found here. Meanwhile, one has to wonder when Tony Perkins or Maggie Gallagher and the National Organization for Marriage will launch a campaign against manscaping since it is "too gay" and threatening to "traditional sex roles" or some similarly insane batshitery. Oh, and for waxing, I tried it once and it hurts like Hell!! Never, ever again.
Posted by Michael-in-Norfolk at Thursday, December 29, 2011