Titanic Artifacts Are Up for Auction Come April 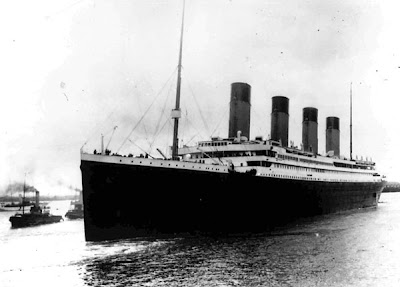 Through strange circumstances the fate of artifacts from the famed but short lived White Star liner Titanic has continued to involve the federal district court for the Eastern District of Virginia. Perhaps because some of the first recovered artifacts came ashore right at the Otter berth on the downtown Norfolk waterfront - I was there when the unloading began and being a Titanic history buff, I had my books on the ship autographed by members of the salvage team, and the boyfriend and I plan on attending a "Last Dinner" event at The Mariners' Museum this coming April. In any event, the Norfolk court seems destined to continue to be involved as Premier Exhibitions and its subsidiary, RMS Titanic, announce the hiring of the New York auction house Guernsey's to seek auction bids on the artifact collection. The Virginian Pilot has coverage on the proposed sale and issues that will surround the effort. Here are highlights:

With the 100th anniversary of the sinking of the Titanic approaching, fans of the doomed steamship can relive the journey on a memorial cruise, attend one of myriad Titanic festivals, or watch the re-release of "Titanic" in 3-D.

But one lucky devotee can buy 5,500 Titanic artifacts plucked from the wreck site in the North Atlantic. Asking price: around $200 million.

The company that owns thousands of artifacts plans to auction off the collection in April - the same month, but 100 years later, that the cruise liner struck an iceberg and sank, killing more than 1,500 passengers and crew.

Atlanta-based Premier Exhibitions and its subsidiary, RMS Titanic, announced the hiring of the New York auction house Guernsey's to seek bids on the collection. The results of the auction are expected to be announced around the 100th anniversary date of the Titanic sinking, April 15, the company said in a news release.

The process will likely be scrutinized by a Norfolk federal judge who has presided over a civil action involving the salvage operations and preservation of the artifacts.

The artifacts had been in a sort of legal limbo for more than a decade as the company, and its predecessor, sought permission from the court to obtain full title to the collection. Earlier this year, Norfolk U.S. District Judge Rebecca Beach Smith granted Premier the title it sought with the condition that the collection be maintained as a whole forever.

The company filed papers in federal court alerting the judge to the upcoming sale. She has not issued any orders on the matter. The Justice Department, which has monitored the court proceeding, may also take a position. The local U.S. Attorney's Office had no comment on the latest developments.

Sellers and company attorney Brian Wainger of Virginia Beach said the company remains committed to preserving the collection as a whole and finding a suitable home for it. They said there can be no better time to do it than the 100th anniversary.

The 5,500 artifacts - including china, jewelry, playing cards, musical instruments and light fixtures - are exhibited in tours around the world. The company also maintains a large chunk of the ship's hull. The artifacts were collected during seven expeditions more than two miles below the ocean surface over nearly 25 years.

The company, and its predecessor, spent millions on those trips, renting expensive ships and submersibles. The company has seen little in profits from the touring exhibits, and Sellers and Wainger acknowledge that part of the reason for the sale is to satisfy shareholders. They say they understand there will be detractors. Some have already begun criticizing the company, on various Titanic blogs, about the sale.

Posted by Michael-in-Norfolk at Friday, December 30, 2011