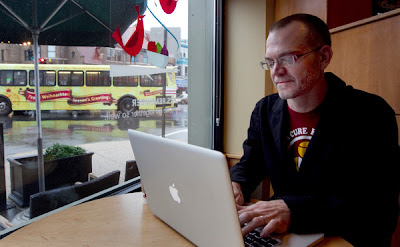 I've written a number of times on this blog (and in my most recent VEER magazine column) about the anti-gay bigotry of the Salvation Army and suggested that those looking to make charitable contributions avoid the Salvation Army like the plague. Like the Catholic Church, the Salvation Army preaches that gays must live a life of celibacy devoid of intimate loving relationships. For students of accurate history, all of this condemnation is based on a few passages written in the Bible by ignorant nomads whose main purpose was to differentiate the Jewish tribes from other societies where homosexuality was accepted as a norm. As a result, per the Salvation Army, gays are doomed to a life of loneliness. It's ignorance and bigotry taken to the highest levels. Why give funds to an organization that embraces ignorance and engages in the same sort of self-congratulatory hypocrisy as the Pharisees whom Christ so frequently condemned and lambasted in the Gospels. Yet unfortunately, too many donors still do not know the real story of the Salvation Army. Fortunately, my friend and Bilerico Project editor in chief, Bil Browning has worked consistently to get the word out. Now, the New York Times has picked up on Bil's efforts and in the future people will hopefully know to direct that contributions elsewhere. Here are highlights from the Times story:

Bil Browning and his boyfriend were homeless. To protect the identity of the boyfriend (now ex-boyfriend), Mr. Browning will not say specifically where, just that it was in “southern Indiana,” about 20 years ago. But he is very explicit about who refused to give them shelter.

“The Salvation Army refused to help us,” Mr. Browning recalls, “unless we broke up and then left the ‘sinful homosexual lifestyle’ behind. We slept on the street, and they didn’t help when we declined to break up at their insistence.”

Mr. Browning’s boyfriend was wearing a “Silence = Death” AIDS pin on his jacket, which must have tipped off the Salvation Army worker. “He told us we needed to be saved,” Mr. Browning says. “If we were willing to attend church services, he could help. We would have to break up, only one of us could stay in the shelter, and if there was room for the other, he would have to be on the opposite side of the room, and we wouldn’t even look at each other.”

Now Mr. Browning, a writer and gay rights advocate, is using his blog to publicize a decade-old boycott of the Salvation Army. The boycott’s proponents say those who drop money into the Salvation Army’s ubiquitous red kettles at Christmastime, or shop in its thrift stores, often know little about the organization’s evangelical Christianity, its opposition to homosexuality, and its occasional attempts to influence public policy on gay rights.

On his Web site, Mr. Browning, whom the Christian magazine World recently called “the Red Kettle Menace,” encourages people to donate instead to other organizations, like the Red Cross or Doctors without Borders.

The Salvation Army’s “Position Statement” on homosexuality, found on its Web site, reads in part: “The Salvation Army does not consider same-sex orientation blameworthy in itself. Homosexual conduct, like heterosexual conduct, requires individual responsibility and must be guided by the light of scriptural teaching. Scripture forbids sexual intimacy between members of the same sex. The Salvation Army believes, therefore, that Christians whose sexual orientation is primarily or exclusively same-sex are called upon to embrace celibacy as a way of life.”

In 2001, The Washington Post obtained a Salvation Army document that said the administration of President George W. Bush had promised to honor a Salvation Army request: that religious charities receiving federal money be exempt from local gay anti-discrimination laws. The day the request became public, the Bush administration said it was being denied.

And in 2004, in response to a City Council ordinance requiring that organizations with city contracts offer benefits to gay employees’ partners, the Salvation Army threatened to stop operating in New York City. In 2006, the New York State Court of Appeals ruled that Mayor Michael R. Bloomberg did not have to enforce the ordinance, which had been enacted over his veto; the Salvation Army never left New York City.

[A] dollar dropped into a red kettle in New York City, a quarter of a penny ends up at national headquarters, where conversations with the government — not lobbying, Mr. Hood says — may take place.

As to the complaint of discrimination based on sexual orientation, he says it is against Salvation Army policy. “If they were legitimate clients looking for food, they should have been helped,” he says of Mr. Browning and his ex-boyfriend.

While the Salvation Army tries to dance around and deny that it's a nasty, bigoted organization, I side with Bil Browning and others I know who have been discriminated against first hand. As a result, I'd frankly rather light my money on fire before I'd ever place it in a Salvation Army kettle. Like many other far right Christian organizations, the Salvation Army makes me long for the day when Christianity - or at least the version propounded by the Salvation Army - is a dead religion. There is no place for hate and bigotry in the world and organizations that foment it need to be thrown on the trash heap of history.
Posted by Michael-in-Norfolk at Sunday, December 25, 2011