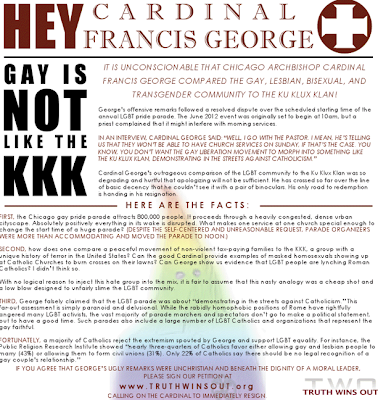 I and countless other bloggers have noted the despicable comments of Cardinal Francis George who has equated gay rights activists with the Klu Klux Klan and alleged that gays are demonstrating against the Catholic Church. In response to my post, I received a bullshit response from the Chicago archdiocese via e-mail. It's ironic that George is talking about others supposedly breaking the law, etc., when according to a report by BishopAccountability.org, George was an aider and abettor of priests who sexually molested children and youths. Rather that disseminating lies and having his ass kissed by moronic Catholic, a jail cell might seem a more appropriate place for the good cardinal.

To better help the Chicago public understand George's behavior and statements, a full page ad - pictured above - will appear in the Chicago Tribune this Sunday compliments of Truth Wins Out. The Advocate has these highlights on the ad and the controversy:

The LGBT rights group Truth Wins Out is taking out a full-page ad in Sunday’s Chicago Tribune calling on the city’s Catholic archbishop, Cardinal Francis George, to resign because of his comments comparing a gay pride parade to a Ku Klux Klan march.

The ad is headlined, “Hey, Cardinal Francis George, Gay is not like the KKK,” and it calls his remarks “offensive” and “unconscionable.”

The parade’s start time was then moved from 10 a.m. to noon so as not to inconvenience worshippers, and George made conciliatory comments but then reiterated the comparison in an official statement on the archdiocesan website this week.

“This is not a legitimate fight over religious liberty as George wrongly implies, but a vivid example of religious bigotry fueled by a mean-spirited analogy that linked innocent, law-abiding families with the KKK,” said Truth Wins Out executive director Wayne Besen in a press release. “We will stand up against such lies and speak out when LGBT people are unfairly maligned.”

I continue to hope for the day when the rank and file members of the Catholic laity will get their heads out of their ass and leave the Church or cease all financial support until foul members of the hierarchy are removed (of course, this would mean Benedict XVI resigning as well).
Posted by Michael-in-Norfolk at Friday, December 30, 2011