Gay Marriage Is Coming To Cancun 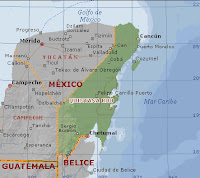 Yet another portion of Mexico is poised to grant to LGBT citizens the rights denied them in much of the United States - which falsely bills itself as "land of the free" and a champion of freedom of religion. That's right, the Mexican state of Quintana Roo, home to popular vacation destinations like Cancun and Cozumel, is allowing same sex couples to legalize their unions thanks to a quirk in the local civil code. And the local tourism industry is expecting a positive uptick as a result. Here are highlights from Hispanically Speaking News:

Cancun and other resort areas on the Mexican Caribbean will have a new attraction for gay and lesbian couples from the United States, Canada and Europe, allowing them to legalize their unions thanks to a quirk in the local civil code, activist Patricia Novelo told Efe.

“This market niche ... is very attractive for European, Canadian and American (homosexual) couples,” said the spokesperson for Colectivo Diversidad. Novelo said that in January the first same-sex group wedding will be held in the resort area as part of local support for the human rights of the gay community.

[S]he said, agreements have begun to be struck with different airlines and hotel chains to hold these marriages all along Mexico’s Caribbean coast. Novelo said that this “is something very positive. Besides the social part there are many economic benefits because the gay community generates between 45 and 60 percent more income on top of conventional tourism.”

She said gay and lesbian marriages are possible in Quintana Roo, “thanks to a legal gap in the Civil Code,” which only makes mention of “people interested in getting married,” without specifying their gender.

In Mexico, same-sex marriages have been expressly authorized in Mexico City, where through Dec. 15 1,246 such unions had been legally finalized, many involving citizens of other countries.

While the Christianists and the Republican Party strive to subvert the Constitution and drag America back into the Dark Ages, other parts of the world continue to step forward and offer the civil rights and equality that America fails to grant to all of its citizens.
Posted by Michael-in-Norfolk at Friday, December 30, 2011