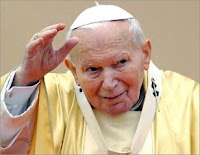 Pope Benedict XVI is not the only head of the Roman Catholic Church being slammed as a result of the sexual abuse scandal exploding across Europe. Also implicated is the less than saintly John Paul II who seemingly protected a buddy who may have sexually assaulted up to 2.000 - yes, I said TWO THOUSAND - boys over a period of time. Obviously, covering up such sick and disgusting abuse is not the act of a supposed saint. There is much that is good about the Roman Catholic Church. However, until the foul cesspool that comprises the majority of the members of the Church hierarchy is removed, I do not know how anyone of good conscience can continue to support and fund the Church. In fact, some of my family members are not too happy with my criticism of the Church, but at some point if one does not refuse to remain in the Church until it cleans its own house, then one becomes part of the problem and a de facto enabler of the morally bankrupt hierarchy. Stopping all financial support and/or voting with one's feet are sadly the only messages that will get through to the bishops, cardinals and amoral Pope. Here are highlights on the latest revelations on John Paul II's misdeeds from the Times of London:
*
Allegations that the late pontiff blocked an inquiry into a paedophile cardinal, promoted senior church figures despite accusations that they had molested boys and covered up innumerable cases of abuse during his 26-year papacy cast a cloud over his path to sainthood. The most serious claims related to Cardinal Hans Hermann Groer, an Austrian friend of John Paul’s who abused an estimated 2,000 boys over decades but never faced any sanction from Rome.
*
Cardinal Christoph Schönborn, Groer’s successor, criticised the handling of that scandal and other abuse cases last week after holding a special service in St Stephen’s cathedral, Vienna, entitled “Admitting our guilt”. Schönborn condemned the “sinful structures” within the church and the patterns of “silencing” victims and “looking away”.
*
The Groer affair became public in 1995 when former pupils of an elite Catholic school accused him of sexual abuse.
*
After an outcry, Groer was replaced and made the prior of a convent. He was never punished and issued only a vague apology in 1998 before retreating to a nunnery where he lived until his death in 2003. Some of his victims were offered “hush money” from the church.
*
Michael Tfirst, 54, one of Groer’s victims, claims to have reported the abuse to highranking church officials from the 1970s onwards. He says the church paid him £3,300 in 2004 under a contract that obliged him to keep quiet.
*
“There is no question that Ratzinger knew all the details of reports on abuse within the church, as there is no doubt that John Paul, his superior, took part in a massive and systematic cover-up,” Tfirst said.
*
John Paul also faced criticism last week from Poland for protecting Archbishop Juliusz Paetz, who was accused of abusing trainee priests. Letters detailing the charges were sent to John Paul’s office and to Ratzinger in 2000 but were ignored. Paetz resigned in 2002 when the allegations became public. Stanislaw Obirek, a Polish theologian and a former Jesuit priest, said: “I believe John Paul is the key person responsible for the cover-up of abuse cases because most of it occurred during his papacy. How can someone who is to blame for this be beatified?”
*
Critics say John Paul II: Failed to encourage bishops to report accusations of paedophilia by priests to the police. Ignored accusations against senior members of the clergy, at times promoting them to higher office. Allowed many priests accused of paedophilia to be transferred to a new diocese without anyone being warned of their record. Decreed that “pontifical secrecy” must apply to cases of sexual abuse in church trials.
*
In any other context, someone how engaged in such malfeasance would be forced to resign and retire in disgrace. They certainly would not be viewed as a candidate for sainthood. Not so the morally bankrupt bitter old queens in dresses at the Vatican
Posted by Michael-in-Norfolk at Monday, April 05, 2010