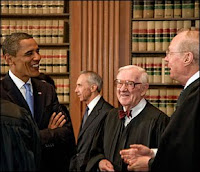 The hypocrisy of the GOP when he comes to judicial appointments is unbelievable. They incessantly whine that the do not want activist judges when in fact the do - they want activist judges who will resist the extension of full constitutional rights to anyone who is not a white, Bible thumping conservative Christian, and who will oppose social programs of every kind. And they want judges that will rule this way no matter how glaringly contrary to the concept of equality under the legal opinions may be or how blatantly the opinions turn the plain language of the Constitution upside down. Indeed, think of the infamous Star Chamber proceedings in England, and one gets a good view of how today's GOP wants the courts to function against all but themselves. With the retirement of U. S. Supreme Court Justice John Paul Stevens this summer, the GOP Neanderthals in Congress are already in full hue and cry and I can only imagine the incendiary verbal diarrhea that Glen Beck and Rush Limbaugh will be spouting to whip the tea baggers and birthers into full frenzy. Obviously, it is imperative that the GOP not block the appointment of a new justice who believes that equality under the law applies to all citizens. Here are highlights from the Washington Post:
*
No matter whom President Obama puts forward as his next Supreme Court nominee, the White House is anticipating a fight within the sharply divided Senate, one made even more fractious by election-year politics.
*
Court nomination fights have traditionally served to electrify each party's voter base, and the confirmation process to fill the seat of departing Justice John Paul Stevens will come as members of Congress are accelerating their reelection campaigns.
*
Many Republicans regard continuing opposition to Obama's agenda as their best hope to pick up seats in the November midterm elections, and Democrats are a vote short in the Senate of being able to avoid a filibuster that has been used only once in a Supreme Court nomination fight.
*
Meanwhile, the Sotomayor confirmation process has given the White House momentum heading into this one, including a short list of vetted candidates, and presidential aides are confident in their ability to successfully navigate the weeks ahead. Their chief concern is how quickly the Senate will act; they fear that Republican delays could push the confirmation process past the August recess and fully into the fall campaign season.
*
Obama made clear during the Sotomayor search that a diversity of life experience and judicial "empathy" were qualities that he valued in a nominee, and officials said at the time that he had some interest in adding a "first" to the high court. Sotomayor became the first Hispanic justice.
*
In a brief Rose Garden statement Friday, Obama added a political edge to the criteria he will use this time. He said that in addition to having a track record of judicial excellence, his choice will "be someone who, like Justice Stevens, knows that in a democracy, powerful interests must not be allowed to drown out the voices of ordinary citizens."
Posted by Michael-in-Norfolk at Saturday, April 10, 2010