UPDATED: The New York Times has copies of the letter set out below (and a translation) and correspondence from the Diocese to Ratzinger's office and Ratzinger. It will be interesting to see how the Vatican tries to spin this objective evidence away. 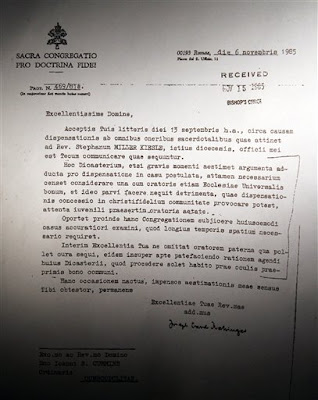 As I have said before, the Vatican seems to have learned nothing from Richard Nixon's debacle in the Watergate scandal. The denials and lies and attempts at cover up only dig the hole deeper and incite reporters to dig more intensively. It also sets the stage where at some point, someone will talk or leak information that makes the denials of knowledge and/or involvement obviously false even to the dumbest individuals and demagogues (think William Donohue of the Catholic League). A case in point is the manner in which Benedict XVI has continuously denied knowledge of or involvement with the coddling of predator priests. As I expected, such denials have been lies and now the Associated Press has obtained possession of a 1985 letter signed by Benedict XVI (then known as Joseph Ratzinger) that (1) confirms Benedict's direct involvement during the time he headed the Vatican office previously known as the Inquisition, and (2) that he stalled action to remove a known predator from active ministry. I have always viewed Benedict XVI as a premeditated liar and as he continues to lie , I suspect even more damaging materials will surface. Here are some highlights from Breitbart.com:

*
The future Pope Benedict XVI resisted pleas to defrock a California priest with a record of sexually molesting children, citing concerns including "the good of the universal church," according to a 1985 letter bearing his signature. The correspondence, obtained by The Associated Press, is the strongest challenge yet to the Vatican's insistence that Benedict played no role in blocking the removal of pedophile priests during his years as head of the Catholic Church's doctrinal watchdog office.
*
The letter, signed by then-Cardinal Joseph Ratzinger, was typed in Latin and is part of years of correspondence between the Diocese of Oakland and the Vatican about the proposed defrocking of the Rev. Stephen Kiesle. The Vatican refused to comment on the contents of the letter Friday, but a spokesman confirmed it bore Ratzinger's signature.
*
The diocese recommended removing Kiesle (KEEZ'-lee) from the priesthood in 1981, the year Ratzinger was appointed to head the Vatican office which shared responsibility for disciplining abusive priests. The case then languished for four years at the Vatican before Ratzinger finally wrote to Oakland Bishop John Cummins. It was two more years before Kiesle was removed.
*
"It is my conviction that there would be no scandal if this petition were granted and that as a matter of fact, given the nature of the case, there might be greater scandal to the community if Father Kiesle were allowed to return to the active ministry," Cummins wrote in 1982.
*
While papers obtained by the AP include only one letter with Ratzinger's signature, correspondence and internal memos from the diocese refer to a letter dated Nov. 17, 1981, from the then-cardinal to the bishop. Ratzinger was appointed to head the Vatican's Congregation for the Doctrine of the Faith a week later. California church officials wrote to Ratzinger at least three times to check on the status of Kiesle's case.
*
Diocese officials considered writing Ratzinger again after they received his 1985 response to impress upon him that leaving Kiesle in the ministry would harm the church, Rev. George Mockel wrote in a memo to the Oakland bishop. "My own reading of this letter is that basically they are going to sit on it until Steve gets quite a bit older," the memo said. "Despite his young age, the particular and unique circumstances of this case would seem to make it a greater scandal if he were not laicized."
*
It is difficult not to conclude that either Ratzinger purposely delayed action or that removing predator priests in order to protect children and youths was a low priority in Ratzinger's mind since he never delayed in acting against those he deemed to be insufficiently reactionary in terms of Church dogma.