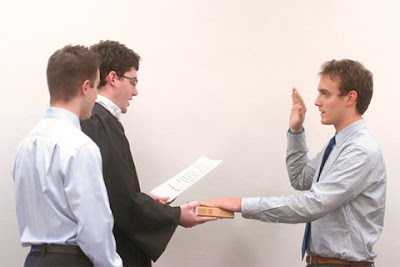 The boyfriend has a slogan at the salon that reads "Time Overtakes the Woman who Doesn't Take the Time." The same can be said for political parties (and religious denominations) that refuse to embrace changing views of the upcoming generations and advances in levels of knowledge. As the GOP seems Hell bent to marginalize itself long term by pandering to the ignorant and reactionary forces of the tea bagger crowd, the voters of tomorrow are heading in a totally different direction. The recent election of a new student body president at the University of Michigan is a case in point. The new president, Chris Armstrong, is openly gay and he won the election by a landslide. Phyllis Schlafly must be beside herself. As the oldest and most reactionary generations die off and as conservative rural areas increasingly account for less of the voting public, it amazes me at times that the GOP seems to be engaged in a slow suicide in the hope of short term expediency. Here are highlights from The Michigan Daily:
*
Elected in a landslide victory last Friday, LGBT Commission Chair Chris Armstrong of MForward is now the first openly gay MSA president — a fact he said he hopes will have large implications not only for the LGBT community on campus, but also for the greater University community. Armstrong said he hopes that being gay and holding a position as assembly president will demonstrate that any University student can represent the “spirit of Michigan.”
*
In an interview with The Michigan Daily yesterday, Armstrong recalled how he did not expect to ever be elected MSA president, after hiding his identity throughout high school and staying out of the public eye. He admitted that he only came out to a few friends and his parents by the end of his senior year in high school.
*
[T]he University isn’t the first university in the Big Ten to have an openly gay student government president. In 2006, Ohio State University elected an openly gay student to serve as the school’s student government president. Armstrong said his new position has been an amazing feat for the LGBT community. “I think that personally, it’s a big accomplishment for the LGBT community on campus,” Armstrong said, adding that his willingness to express his identity motivated him to run in the election.
*
As the first openly gay MSA president, Armstrong calls his newly-elected position “symbolic” for the assembly. He said he hopes more people will feel welcome to be themselves at the University. He added that he encourages gay students to express their sexual orientation without fear of being discriminated against. “Hopefully individuals will feel comfortable coming out at U of M and know that it’s a comfortable environment despite fears and inhibitions,” he said.
Posted by Michael-in-Norfolk at Sunday, April 04, 2010

Email ThisBlogThis!Share to TwitterShare to FacebookShare to Pinterest
Labels: equality under the law, future of the GOP, living out and proud, Michigan, Phyllis Schlafly, younger voters