ENDA Next Target on Teabagger/Wingnut Radar 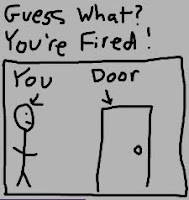 While still shrieking and wailing over the "socialist agenda" being furthered by the recently enacted health care reform bill, the loonies at World Net Daily are now seeking to enrage their reality untethered followers by depicting ENDA as a program to require "gay hires" or even enforce quotas. Never mind the actual language in the proposed legislation or the fact that most polls show a large majority of Americans support employment discrimination protections for LGBT employees. Even callers on a small TV talk show in Martinsville, Virginia, were supportive of Michael Moore's action to seek redress against the Virginia Museum of Natural History. Always seeking to spread hysteria, Wing Nut Daily also describes ENDA as an effort to target "Christian employers." Here's a sampling of the WND rant:
*
Now that the health-care fight has proven House Democrats can muscle through legislation without a drop of bipartisan support, plans are underway to resurrect a bill that would make employers susceptible to lawsuits for refusing to hire "gay" or transsexual employees.
*
The bill does make exceptions for the U.S. military, religious organizations and some businesses with non-profit 501(c) designations, but makes no provisions for business owners' consciences. A small construction company that wanted to maintain a Christian reputation, for example, could be sued if it refused to hire transvestites. Openly homosexual members of the House, enthused by the health-care victory, are now looking to return from the congressional recess to begin work on ENDA.
*
"This bill would force Christian, Jewish or Muslim business owners to hire people who openly choose to engage in homosexual or cross-dressing behaviors," said Barber, "despite a sincerely held religious belief that those behaviors are dangerous, sinful and not in keeping with basic morality. "ENDA would essentially force employers to check their First Amendment protected rights to freedom of religion, speech and association at the workplace door," he said.
*
The sad reality is that the Christianists want freedom of religion and anti-discrimination protections for themselves, but do not give a damn about the rights of other citizens who may hold differing beliefs and faiths. It is all about the Christianists and screw everyone else. As for the proposed H.R. 3017's actual provisions (these quotes are from Section 4), here are some highlights:
*
(a) Employer Practices- It shall be an unlawful employment practice for an employer--
*
(1) to fail or refuse to hire or to discharge any individual, or otherwise discriminate against any individual with respect to the compensation, terms, conditions, or privileges of employment of the individual, because of such individual’s actual or perceived sexual orientation or gender identity; or
*
(2) to limit, segregate, or classify the employees or applicants for employment of the employer in any way that would deprive or tend to deprive any individual of employment or otherwise adversely affect the status of the individual as an employee, because of such individual’s actual or perceived sexual orientation or gender identity.
*
(f) No Preferential Treatment or Quotas- Nothing in this Act shall be construed or interpreted to require or permit--