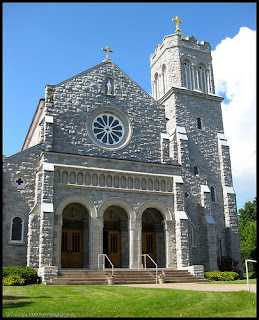 Today turned out to be a very pleasant day in many ways. The boyfriend and I had a leisurely morning and then went to church with his parents at Hampton Baptist Church in the old downtown area of Hampton. The service was very nice and ended with a flawless rendition of the Hallelujah Chorus. The music brought back childhood memories of Easter and my mother's parents' home in upstate New York where we attended a magnificent Catholic Church (pictured at left) which was (and I assume still is) an amazing structure more akin to a small cathedral rather than what one would have expected in a relatively small town. The church was half a block from my grandparents' home and we typically had aunts, uncles and cousins staying at the house and we also would see other cousins who lived locally at church. As a child, the church seemed stupendous since our home parish was very small and anything but grandiose. The whole experience probably in retrospect helped draw me to religion early on even before I began my quest to "pray away the gay."
*
The experience made me ponder whether I believe in God and, if so, in what form. The answer is that yes, I do believe in a God/Creator. Do I believe in all the details in the Bible? Probably not so much, especially the Old Testament which to me reflects a combination of the early Israelites' ignorant efforts to explain the unknown and their desire to be different and set themselves apart from other societies and ethnic groups. And the Resurrection story? Maybe yes, may be no. After all, the theme was well known before the Christians adopted the story line in the form of worship to Mithras and Isis among others. The basic message of Christ of charity and love of neighbor. Definitely, yes.
*
After church, we took the in-laws and one of their elderly friends out to lunch and as always they proved a combination of entertaining and sincerely touching. I truly consider myself fortune to have such accepting and loving parents in-law if you will. Naturally, at the church service the boyfriend saw numerous clients who have likewise been most accepting of us as a gay couple whenever we attend church at that church.
*
The rest of the day has been relaxing and I spoke with my mother, youngest daughter and left messages for other family members and friends. Weather wise, the day was exactly what one would want - clear, sunny and in the mid-70's. I even got to sit in the sun and read a book for a while overlooking the tidal creek behind the house.
Posted by Michael-in-Norfolk at Sunday, April 04, 2010