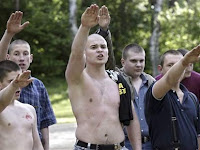 Elements of the radical far right that seem to be living in some bizarre fantasy world continue to show themselves to be potential sources of violence. Some of their rants sound like they are direct from World Net Daily and/or Fox News were being tethered to objective reality is not a requirement. The worry is that some of the crazed hyperventilating will lead to some of the more unhinged elements actually resorting to armed confrontation or other actual attacks against government personnel akin to the recently disclosed plot to kill a Michigan police officer and then attack the funeral procession. Think Progress looks at this phenomenon which has the FBI concerned. Here are some highlights:
*
[T]he FBI has issued an intelligence note warning police that an anti-government group’s call to remove dozens of sitting governors may encourage others to act out violently. The group, “Guardians of the Free Republics,” wants to “restore America” by dismantling parts of the government, according to its website. Governors receiving the threats include Bobby Jindal (R-LA), Jim Doyle (D-WI), Chet Culver (D-IA), Jim Gibbons (R-NV), among others.
*
While much of the rhetoric from the group resembles the style of patriot extremist organizations, their concerns seem to stem directly from economic anxiety. The group’s broadcasting affiliate, Republic Broadcasting Network, advertises survival kits, gold buying guides, and other hallmarks of a movement in America which believes that the country is heading towards economic collapse. The website also promotes tea party protests, calls for revolution, videos from Glenn Beck, and sympathetic articles about recent right-wing domestic terrorist activities, like the suicide attack on an IRS building in Austin earlier this year.
*
Guardians of the Free Republics’ call to dismantle the government has gained traction on right-wing tea party websites. The groups’ proclamation is posted on ResistNet, the popular tea party forum, as well as Tree of Liberty, a tea party forum known to have been frequented by users which supported Hutaree, the Christian militia recently arrested in Michigan.
*
A Department of Homeland Security report, ridiculed by Republican lawmakers last year, details that extended economic downturn with real estate foreclosures, unemployment, and an inability to obtain credit could foster an environment for extremists to recruit new members who may not have been supportive of these causes in the past.
*
Not surprisingly, these groups bear hate and suspicion towards those who are "other": gays, blacks, immigrants, etc., who they see as not "real Americans."
Posted by Michael-in-Norfolk at Monday, April 05, 2010