A Day Without A Gay 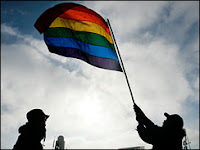 Today is targeted to be a day where all across the country gays when possible will stay home from work and hopefully donate their time to a charity or other worthwhile cause. In areas such as Hampton Roads, I suspect many gays will not call in gay for fear of being fired - sadly Virginia has NO employment non-discrimination laws protecting LGBT workers. Nonetheless, it will be interesting to see how visible the impact will be in states where being gay isn't a possible basis for immediate firing. The Huffington Post has an article that struck my interest because it (1) mentions Jason Cianciotto, Director of Wingspan, Southern Arizona's lesbian, gay, bisexual and transgender community center who I got to know back in 2003 when I was a workshop panelist at the NGLTF Creating Change Conference in Miami, and (2) looks at the Mormon Church activities in Arizona, something that has not received enough attention. In addition, the article looks at the need for LGBT citizens to come out and tell their stories, something too few in this area have the courage to do. Here are some highlights from the HP article:
*
In discussion of the setback suffered by gay rights proponents in the recent election, what happened in Arizona is often little discussed. While Proposition 8 in California has gotten most of the attention of the country, Arizona's Gay/Lesbian/Bisexual/Transgender community is coming to terms with their own defeat. Arizona's Proposition 102 didn't actually change Arizona's law, which already defined marriage as between a man and a woman, but added that language to the state constitution.
*
As Executive Director of Wingspan, Southern Arizona's lesbian, gay, bisexual and transgender community center, Cianciotto described the mood of the 200-250 workshop attendees. "They're hurting. Not only was the existing anti gay marriage law codified into the state constitution, but Arizona went from being the only state to actually defeat an anti gay marriage bill," (Arizona voters defeated Proposition 107 in 2008) "to having that victory taken away from us."
*
For Cianciotto, the defeat came down to two significant factors: the way the amendment was sold in Arizona, and the way in which the GLBT and progressive community responded. Not surprisingly, Cianciotto sees money as the pivotal issue. Since election day, the huge amount of money pumped into the anti gay marriage initiative in California has been well documented, and Cianciotto sited similar statistics concerning Arizona. . . . And Cianciotto believes the source of the message had a huge impact too. "When potential voters receive an anti gay marriage message sent to them by a leader that they believe to have been ordained by God, you can't overlook that."
*
Cianciotto discussed a web based campaign started by Wingspan. The campaign is called Families You Know, and features stories and videos from members of the GLBT community. Launched on November 14 of this year, stories told on Families You Know are very personal and often very moving, and Cianciotto hopes this will become a nationwide effort, one he sees as a way of laying a foundation for changing how people feel, even with-and perhaps especially with -those with the most entrenched anti gay marriage beliefs.
*
This isn't a pipedream for Cianciotto, it stems from his own personal experience. Raised in an Evangelical household, Cianciotto was kicked out of his home as a teenager. As a student at the University of Arizona in Tucson, Cianciotto came out of the closet while attending a Wingspan youth group. He understands the stories told on Families You Know, and also understands the reactions of those who may view them. "Some people may come to the website and for the first time see a gay person tell their story. Or they may see a story like the straight grandmother who talks about the joy of spending time with her grandchild who happens to have two dads." Cianciotto sees Families You Know as a way for the GLBT community to channel their frustration and anger into something positive, "to connect that energy into a way to effect positive social change."
*
As a human being and a gay person, I have three basic demands: Recognize my relationships. Allow me to make a living. And allow me to serve my country and my countrymen. Without those three basic fundamentals, we won't achieve equality. . . . Jacobs is hopeful that the activism they saw among participants in the Equality Arizona workshops continues to grow, and Cianciotto agreed: I sensed a definite feeling among everyone there. We are moving forward, and we are not going to hide anymore.
Posted by Michael-in-Norfolk at Wednesday, December 10, 2008

Email ThisBlogThis!Share to TwitterShare to FacebookShare to Pinterest
Labels: anti-gay amendment, Arizona, Coming Out at Work, Day Without Gay, Families You Know, Wingspan