Lies in the Name of God 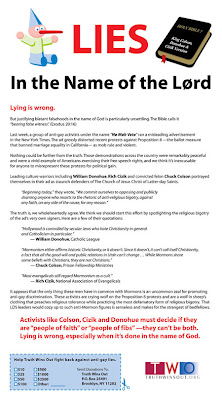 Truth Wins Out, an organization run by my friend Wayne Besen - which has in the past featured a video of yours truly discussing fallen ex-gay, Michael Johnston - is taking out a full-page ad (above - click to enlarge) in the Salt Lake Tribune today in order to counter the Becket Fund's 'No Mob Veto' ad that ran last week in the New York Times. The Becket Fund ad, signed by a group of religious leaders known for their anti-gay views, falsely pretends that the Christianist leaders are friendly towards Mormons and seeks to characterized peaceful protests against Proposition 8 as a form of mob violence against religion. Wayne's comment on the backers of the Becket Fund ad are as follows:
*
“These anti-gay activists are crying wolf on the Proposition 8 protests, but they actually are a wolf in sheep’s clothing that preaches religious tolerance while practicing the most defamatory form of religious bigotry. We refuse to permit this orchestrated campaign to rewrite history, nor will we allow some of the most notorious Mormon bashers in America to pose as friends of the Latter-day Saints."
Posted by Michael-in-Norfolk at Thursday, December 11, 2008