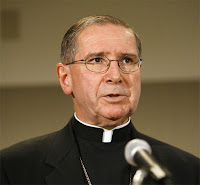 Sometimes I honestly cannot help but wonder whether or not the members of the Roman Catholic Church hierarchy think everyone other than themselves are utter morons or have all recently suffered lobotomies. Do they truly believe that thinking people with IQ's over say even 85 are too dim witted to figure out that the authors of so-called pastoral letters don't mean a damn word they write? Or do they just think we all have the gullibility of a three year old child? A case in point is Cardinal Roger "Lets Protect the Child Molesters" Mahoney of Los Angeles who has floated a "pastoral letter" to gay Catholics in his archdiocese. Mahoney apparently believes that notwithstanding all of the efforts of the Catholic bishops and the Knights of Columbus to secure passage of Proposition 8 that gays are so incredibly stupid that we will believe his false claims that the Roman Catholic Church doesn't really wish us ill. Tell lies about us, malign us, imply we are all child molesters, call us "inherently disordered" or perhaps even call us evil, but deep down we are supposed to believe that the Catholic hierarchy actually care about us. Sorry Cardinal, but we are not as dumb as you think. Here are some highlights of the bullshit shoveled out by Mahomey:
*
As Bishops of the Archdiocese of Los Angeles, we are addressing this message first of all to the homosexual members of our Church. Given the controversy generated by the passage of Proposition 8, we want to reassure each of you that you are cherished members of the Catholic Church, and that we value you as equal and active members of the Body of Christ.
*
The passage of Proposition 8 in the State of California does not diminish in any way the importance of you, our homosexual brothers and sisters in the Church. Nor does it lessen your personal dignity and value as full members of the Body of Christ.
*
Proposition 8 was never intended, directly or indirectly, to lessen the value and importance of gay and lesbian persons. Your intrinsic value as human beings and as brothers and sisters continues without change.
*
We welcome thoughtful and civil dialogue with you so that we can deepen our realization that all of us cherish God's creative life which we equally share. We are committed to find ways to eliminate discrimination against homosexual persons, and to help guarantee the basic rights which belong to each of us.
*
As the saying goes, actions speak louder than words and the Roman Catholic Church's actions make it most clear that LGBT individuals are regarded as little better than human garbage by the Church leadership. Talk is cheap and disingenuous lip service doesn't change the true reality of the situation. Why any LGBT individual would remain a Catholic defies (in my view at least) comprehension.
Posted by Michael-in-Norfolk at Monday, December 08, 2008