The perennially gay sex obsessed men over at Concerned Women for America would have you believe that Barack Obama is under control of the mean, nasty gays who are out to subvert marriage and the nation. The CWA website now has a special "Obama Watch" feature obviously aimed at stirring up the sheeple so that they will continue to send in their money contributions to CWA and keep the homophobic closet cases on the CWA payroll employed. The chart below (click for a larger view) shows the "gay agenda" that CWA alleges Obama will help implement. Here's a sampling of some of the other bat shit crazy propaganda on the CWA website (in reading it, remember that these folks claim that they do not hate gays - judge for yourself):
*
Through a carefully crafted, decades-old propaganda campaign, homosexual activists have successfully cast homosexuals — many of whom enjoy positions of influence and affluence — as a disadvantaged minority. They have repackaged and sold to the public behaviors which thousands of years of history, every major world religion and uncompromising human biology have long identified as immoral and sexually deviant.
*
As with every major political movement, the homosexual lobby is pushing a specific agenda. It is often called the “gay agenda.” At its core is a concerted effort to remove from society all traditional notions of sexual morality and replace them with the post-modern concept of sexual relativism. That is to say, when it comes to sex, there is never right or wrong. All sexual appetites are “equal.” If it feels good, do it.
*
Ultimately, the homosexual lobby’s primary objective is to radically redefine our foundational institutions of legitimate marriage and the nuclear family by unraveling God’s natural design for human sexuality. In so doing, they hope to elevate their own spiritual and biological counterfeit and establish a sexually androgynous society wherein natural distinctions between male and female are dissolved. This creates cultural and moral anarchy.
*
They are quite affirmative in principle. But the principles they foist demand comprehensive acceptance of homosexual conduct — by force of law — through federal edicts such as “hate crimes” legislation, the so-called “Employment Non-Discrimination Act” (ENDA) and by imposing government sanctioned “same-sex marriage.” All such government mandates grant special protected “minority” status to those who define themselves by aberrant sexual preferences and changeable sexual behaviors. These laws put people with traditional values directly in the crosshairs of official government policy.
* 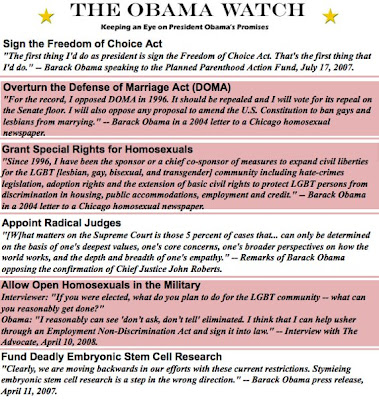 Posted by Michael-in-Norfolk at Tuesday, December 09, 2008