Blackwater Shootings Were 'Without Justification' 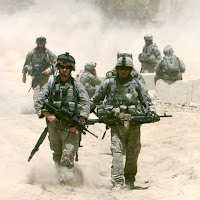 The United States Justice Department has concluded that the shooting of 17 Iraqi civilians back in September of last year by Blackwater USA mercenaries were without justification and has brought indictments against five Blackwater USA employed mercenaries. I did a post here last year that looked at the horrible way in which innocents were callously killed. For newer readers, Blackwater USA is the Christianist owned and led mercenary firm located in nearby Moyock, North Carolina (about 25-30 miles from here). Blackwater is headed by Erik Prince whose mother, Elsa Prince Broekhuizen, gave $450,000 in support of Proposition 8. In 2004, Broekhuizen was the top West Michigan contributor to Michigan's anti-gay marriage amendment, adding $75,000 to the cause.
*
I do not condone the use of mercenaries and as one blogger noted last fall, the presence of private armed forces in Iraq is a byproduct of the Chimperator Administration's determination to keep the Iraq War a "luxury conflict" which relies solely on a volunteer military and avoids conscription, no matter the consequences to the institutions of the armed forces or the people who serve in them. I hate to say it, but I can just imagine the reckless, macho Rambo types who go to work for outfits like Blackwater. Living in an area with a huge military personnel presence, one cannot help but encounter some real jerks who thing shooting people up and destroying things is a great entertainment. Add to that the Christianist attitude that non-Christian Iraqis are little more than animals and the result is toxic and fatal. It is noteworthy that the indicted men will try to have their trial in Utah where they apparently believe the Mormon dominated populace will care less about the murder of innocent non-Christians. Here are some highlights from the Virginian Pilot's coverage:
*
Federal prosecutors confirmed today that five security guards, employed by Blackwater Worldwide face federal charges that could put them in prison for the rest of their lives over their roles in a September 2007 shooting spree that left 17 Iraqis dead at a busy intersection in downtown Baghdad. The five include an ex-Marine once stationed in Norfolk. A sixth Blackwater employee pleaded guilty on Friday to one count of voluntary manslaughter and one count of attempted voluntary manslaughter, the prosecutors said. As part of a plea bargain, Jeremy Ridgeway is expected to testify against the other defendants; Assistant Attorney General Patrick Rowan would not confirm that however.
*
The defendants - Paul A. Slough, 29, of Keller, Texas; Nicholas Slatten, 23, of Sparta, Tenn.; Evan Liberty, 26, of Rochester, N.H.; Dustin Heard, 27, of Maryville, Tenn.; and Donald Ball, 26, of West Valley, Utah - each face 14 counts of voluntary manslaughter, 20 counts of attempted manslaughter and one count of using a firearm during a violent crime. Heard served with the Norfolk-based first fleet anti-terrorism security team between 2000 and 2003, according to his service record.
*
All five men surrendered to federal authorities in Utah earlier today. They are expected to fight to have their cases tried there, where defense lawyers apparently believe jurors may be more favorably disposed toward them than jurors in Washington. “While there were dangers” in Nisoor Square, the site of the shootings on Sept. 16, 2007, “there also were ordinary people,” headed to work, their homes or to market, Rowan said. The defendants shot into the crowd “without justification or provocation,” he asserted.
*
The killers must pay for their crime against innocent civilians. Justice must be achieved so that we can have rest from the agony we are living in," said Khalid Ibrahim, a 40-year-old electrician who said his 78-year-old father, Ibrahim Abid, died in the shooting. "We know that the conviction of the people behind the shooting will not bring my father to life, but we will have peace in our minds and hearts."
*
Blackwater is the largest security contractor in Iraq and provides heavily armed guards for diplomats. Since last year's shooting, the company has been a flash point in the debate over how heavily the U.S. relies on contractors in war zones. The company itself was not charged in the case.
Posted by Michael-in-Norfolk at Monday, December 08, 2008

Well if they must pay for their crimes, then why not Bush and Chaney?