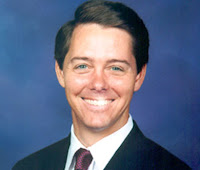 As predicted, the regular Christianist loud mouths are in a frenzy hyperventilating over the Newsweek story on the Biblical basis for gay marriage that I talked about just yesterday. The always homophobic blowhards Richard Land of the Southern Baptist Convention and Tony Perkins of Family Research Council make the same old disingenuous anti-gay arguments and Ralph Reed - who I met in person at a political meeting some years back where he sent my gaydar into overdrive - chimes in too, apparently seeking attention after his ill-fated political run in Georgia. What strikes me most is that without the pretext of always working to "protect marriage," these guys would all be basically out of jobs In other news, the Chimperator made comments that will likely cause James Dobson wet himself. First, here are highlights from Politico concerning the shrieking against Newsweek (btw, remember that Perkins has NO theological credentials of his own):
*
Leading social conservatives blasted Newsweek for its current cover story, "The Religious Case for Gay Marriage," which they said misinterprets both biblical scripture and their own political movement. “It doesn’t surprise me. Newsweek has been so far in the tank on the homosexual issue, for so long, they need scuba gear and breathing apparatus,” said Richard Land, who heads the Southern Baptist Convention’s Ethics and Religious Liberty Commission. “I don’t think it’s going to change the minds of anyone who takes biblical teachings seriously.”
*
Tony Perkins, president of the socially conservative Family Research Council, agreed, calling Newsweek’s cover story “yet another attack on orthodox Christianity.” “I hardly think that Newsweek is a credible venue for theological discussion,” said Perkins. “I mean, I thought it was just full of holes.”
*
In addition to contesting Newsweek’s specific scriptural arguments, some social conservatives took issue with the basic premise of the magazine’s story: that conservative opposition to same-sex marriage is based on specific biblical instructions. “I see it as an attempt to caricature and reduce to a cartoon the social conservative belief in the efficacy of traditional marriage, and try to reduce it to some formulaic, scriptural literalism,” said Ralph Reed, the former executive director of the Christian Coalition.
*
In an e-mail to Politico, Maggie Gallagher, the president of the National Organization for Marriage, took a similar line, calling marriage “the one necessary adult relation in society – the way we bring together male and female to bring the next generation to life in a way that connects those children in love to their own mother and father.”
*
On a somewhat related note, during an interview, the Chimperator said what can only be considered as heresy by the most unhinged Christianists. Namely, that the Bible is not to be construed literally and that the theory of evolution is not incompatible with the Bible. Here are some highlights from Raw Story:
*
US President George W. Bush said in an interview Monday that the Bible is "probably not" literally true and that a belief that God created the world is compatible with the theory of evolution. "I think you can have both," Bush, who leaves office January 20, told ABC television, adding "You're getting me way out of my lane here.
*
"I think that God created the Earth, created the world; I think the creation of the world is so mysterious it requires something as large as an almighty and I don't think it's incompatible with the scientific proof that there is evolution," he told ABC television. Asked whether the Bible was literally true, Bush replied: "Probably not. No, I'm not a literalist, but I think you can learn a lot from it."
Posted by Michael-in-Norfolk at Tuesday, December 09, 2008

I'm not surprised by the other yabbering fools, but honestly I am shocked at Bush. Someone is gonna get a spanking.