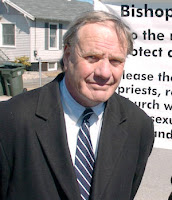 Rather than deal with the problems within the Roman Catholic Church, as is typical the Church leadership would rather try to silence critics who demand that there be accountability. The latest case as reported by Yahoo News involves Portland Bishop Richard Malone who has banned Paul Kendrick (pictured at left), a co-founder of the Maine chapter of the lay reform group Voice of the Faithful, from the Cathedral of the Immaculate Conception in Portland, and warned in a letter that if he tries again to contact Malone, he risks losing any right "to participate fully in the sacramental life of the church." Kendrick has been a vocal critic of how church leaders have responded to abuse claims and treated victims. My personal advice to Kendrick and other Catholics - walk away and find a less corrupt and nasty denomination. Only loss of significant numbers of church members and, more importantly, loss of monetary contributions, is all that the bitter old men in dress within the hierarchy understand. Here are some story highlights:
*
"It's a not-so-subtle attempt to silence me," Kendrick said Monday. "My response is that it's not about me. It's about protecting children today and helping and supporting those who were abused. He will not silence me from speaking out on those issues."
*
Kendrick has protested outside churches, inundated the diocese with mail and e-mail, participated in a public confrontation with Malone and even showed up at an out-of-state meeting the bishop attended, Bernard said. She called it a campaign of harassment that ultimately could undermine Malone's ministry.
*
Kendrick got word of the potential penalty after he told the bishop in a letter that he planned to attend Christmas Eve Mass at the Cathedral of the Immaculate Conception, where Malone often celebrates Mass. The activist then received a criminal trespass order that barred him from the cathedral, the chancery and Malone's residence. He was also served an order to cease and desist from harassing Malone.
*
Nicholas Cafardi, a canon lawyer and former dean of Duquesne Law School, said he had never heard of a bishop using church law, in this case the threat of an "interdict," against activists. "It's extremely unusual," said Cafardi, who was an original member of the National Review Board, the lay panel the U.S. bishops created in 2001 to monitor their response to the abuse scandal.
*
The Rev. Tom Doyle, a Virginia priest and advocate for victims who is representing Kendrick, said the church has threatened to prevent Kendrick from receiving Holy Communion if he doesn't comply. Doyle said he can't find any basis for the diocese's actions, but he said church leaders have been angered by the aggressive tactics of some activists. Doyle said his work with abuse victims cost him a promising career as a canon lawyer in the church. "One of the biggest sins in the Catholic Church is to criticize a bishop," Doyle said.
*
Last year, Malone released the names of 12 living former priests who faced credible allegations of abuse in Maine. The diocese also validated allegations against nine of 21 deceased priests identified by the attorney general in 2005 as being accused of sexual abuse.
*
It would appear that Malone is a modern day Pharisee far too used to having his ass kissed by sheep like parishioners. And if criticizing a bishop is a no-no, I guess I'm in deep shit. As if I give a twit what such hypocrites and phonies think of me.
Posted by Michael-in-Norfolk at Tuesday, December 30, 2008