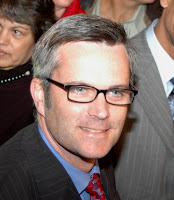 In many ways Portland, Oregon is a leader in progressive government. Now Portland can boast an openly gay mayor and what's amazing, his sexual orientation was never brought up in the campaign. What a concept: judge people on their ability and intelligence rather than who they love and sleep with. It's not a concept I expect to see widely prevalent in Virginia any time soon. Being here in New York City is in many ways has made me reflect on just how socially backwards Tidewater Virginia remains be it interms of gay acceptance of interracial couples. Here are some story highlights from the Associated Press:
*
PORTLAND, Ore. (AP) — Portland became the nation's largest city with an openly gay mayor Thursday as a longtime City Hall insider took the oath of office. Sam Adams, 45, was sworn into office at 12:01 a.m. New Year's Day at City Hall during a ceremony attended by a crowd of about 40 that included his mother and his partner. Adams won the job seven months ago in a primary race by capturing 58 percent of the vote and therefore negating the need for a runoff election.
*
None of Adams' opponents raised his sexuality in the race. Neither did he. "This is a testament to how fair-minded Portlanders are that it wasn't an issue," Adams said. "I spend my time on the basic issues of life. A part of that includes equal rights, but that's not even close to a majority of the time."
*
The new mayor said he and other city officials have so far requested $880 million in federal funds for dozens of "shovel-ready" projects to improve parks, roads and the water system in Portland, which has a population of about 575,000.
*
In two weeks, the city plans to announce a job stimulus package, he said, though he declined to give details. "What I've found is in each of those recessions is government falls prey to the national frailty," he said. "What's also frustrating is it's happening at the very time when government is needed most."
Posted by Michael-in-Norfolk at Saturday, January 03, 2009