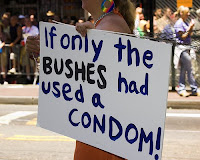 Even a casual reader of this blog will soon realize that I despise the Chimperator who I believe is the worst president EVER in the history of the United States of America. He is exhibit #1 as to why an intellectually lazy, ignorant in terms of other cultures, and blindly religious fundamentalist individual should NEVER again hold the office of President. The Bush legacy is one of doing much damage to the nation domestically and internationally and I believe history will not be kind to either him or Emperor Palpatine Cheney. He at home the Bush/Cheney regime has severely damaged the economy and undermining civil liberties for U.S. citizens. Internationally, he has made torture a U.S. policy and acted as a war criminal. Bob Herbert in the New York Times has an overview of the Bush/Cheney disaster that I agree with fully. Here are some highlights:
*
Does anyone know where George W. Bush is? . . . We’re still at war in Iraq and Afghanistan. Israel is thrashing the Palestinians in Gaza. And the U.S. economy is about as vibrant as the 0-16 Detroit Lions. But hardly a peep have we heard from George, the 43rd.
*
When Mr. Bush officially takes his leave in three weeks (in reality, he checked out long ago), most Americans will be content to sigh good riddance. I disagree. I don’t think he should be allowed to slip quietly out of town. There should be a great hue and cry — a loud, collective angry howl, demonstrations with signs and bullhorns and fiery speeches — over the damage he’s done to this country.
*
This is the man who gave us the war in Iraq and Guantánamo and torture and rendition; who turned the Clinton economy and the budget surplus into fool’s gold; who dithered while New Orleans drowned; who trampled our civil liberties at home and ruined our reputation abroad; who let Dick Cheney run hog wild and thought Brownie was doing a heckuva job.
*
The Bush administration specialized in deceit. How else could you get the public (and a feckless Congress) to go along with an invasion of Iraq as an absolutely essential response to the Sept. 11 attacks, when Iraq had had nothing to do with the Sept. 11 attacks?
*
He then set the blaze that has continued to rage for nearly six years, consuming more than 4,000 American lives and hundreds of thousands of Iraqis. (A car bomb over the weekend killed two dozen more Iraqis, many of them religious pilgrims.) The financial cost to the U.S. will eventually reach $3 trillion or more, according to the Nobel laureate economist Joseph Stiglitz.
*
And then there’s the Bush economy, another disaster, a trapdoor through which middle-class Americans can plunge toward the bracing experiences normally reserved for the poor and the destitute.
*
The president would give the wealthy and the powerful virtually everything they wanted. He would throw sand into the regulatory apparatus and help foster the most extreme income disparities since the years leading up to the Great Depression. Once again he was lighting a fire. This time the flames would engulf the economy and, as with Iraq, bring catastrophe.
*
The catalog of his transgressions against the nation’s interests — sins of commission and omission — would keep Mr. Bush in a confessional for the rest of his life. Don’t hold your breath. He’s hardly the contrite sort. He told ABC’s Charlie Gibson: “I don’t spend a lot of time really worrying about short-term history. I guess I don’t worry about long-term history, either, since I’m not going to be around to read it.”
Posted by Michael-in-Norfolk at Wednesday, December 31, 2008

I don't holdout much hope. The liars are going to get away with it. Not just scot-free, but handsomely enriched.

That the administration leaves in disgrace seems to satisfy most Americans. To actually punish a president is beyond their ken. That would, they believe, demean the office and make future presidents look over their shoulder all the time.

That means presidents like the current one get away with lies, high crimes and misdemeanours.

Is Bush a criminal? Even if he is, should he be prosecuted for something he did in the course of executing official duties?

Most Americans, brought up with a reverence for the president that borders on mystical, would stop short at formally acknowledging a president to be a crook. We did it with Spiro Agnew, but couldn't quite bring ourselves to do it with even the detestable Richard Nixon.

Yes, the bastards are going to get away with it.

You forgot that William Jefferson Clinton was impeached by a Republican controlled Congress for "high crimes and misdemeanors" with Rush Limbaugh and Matt Drudge leading the charge. Even during this Presidential Primary campaign the "charge" that the Clintons had Vince Foster murdered reared its ugly head again.

Should Bush be tried for his crimes? Yes. In order to ensure that no future President, no future Administration ever again uses the Roman Empire as a model for democratic rule.