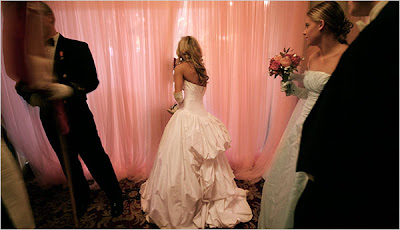 With millions of families facing foreclosure and the loss of their homes it is beyond sick that the very wealthy - those who have been the main beneficiaries of the Chimperator's policies - continue to spend money on what one might consider to be obscene levels. A case in point is this year's International Debutante Ball at the Waldorf-Astoria this past Monday night. People are facing homelessness and millions around the world ate going hungry and these folks squander money on frivolity. I am not against wealth and I am not against gorgeous affairs, but at some point some sense of propriety under the financial circumstances gripping the country would not be unwelcome. Not surprisingly, the state with the most debutantes was Texas, home state of the Chimperator. These folk are the modern day successors to Marie Antoinette's alleged comment "let them eat cake." Here are some highlights from the New York Times:
*
You had to look hard amid the four-foot floral sculptures and the Vera Wang originals to see signs of the economy’s collapse at the International Debutante Ball at the Waldorf-Astoria on Monday night.
*
Champagne flowed. Men in tails waltzed and fox-trotted with debutantes in long white gowns to music by the 12-piece Lester Lanin Orchestra, a fixture at the ball almost since its inception in 1954. And shortly before midnight, the young debutantes, each flanked by a civilian and military escort, ascended the stage for a deep curtsy.
*
The director of the ball, Margaret Hedberg, brushed off the $14,000 cost of a table — “Watches cost more,” she said — although she acknowledged that perhaps the deepening recession accounted for the smaller crowd. “People are not going overboard,” said Mrs. Hedberg, who came out in 1963 and is the niece of the ball’s founder, Beatrice Dinsmore Joyce. “They’re not taking three or four tables and inviting everybody’s friends’ friends. It’s a little more conservative that way.”
*
Steeped in tradition, the ball is one of the most exclusive debutante galas in New York and around the country, and this year it included young women from 11 states and from England, France, Germany, Greece and Hong Kong. The biggest contingent was from Texas, 11 women who had perfected their signature curtsy, the “Texas dip,” which drew gusts of applause from the crowd.
*
And if all those little edible gold leaves adorning the chocolate boxes that contained plump raspberries for dessert seemed a little excessive, Mrs. Hedberg found a sunny side in the spillover effects. “There are a lot of people who make those dresses and are happy that these gals bought them,” she said. “There are a lot of waiters working tonight, so it’s doing something for the economy.
Posted by Michael-in-Norfolk at Thursday, January 01, 2009

If they want to introduce these kids to society, can't they use Facebook or Girls Gone Wild like everybody else.

Since trickle-down money is all there is right now, we should be happy the rich are spending.
Of course, the money would do more good if donated to a worthy cause, but since that is not likely to happen, I'd prefer it be spent than horded.