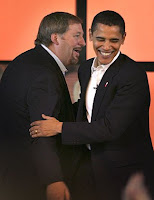 Frank Rich at the New York Times is one of my favorite columnists. He has an amazing flare with words and can ever so eloquently slice and dice politicians, Christianist wingnuts and others that it's most pleasurable reading his columns. In today's New York Times, Rich turns his sights on Barack Obama and obese, gay-hating, Christianist snake oil merchant Rick Warren. And, as usual, it's a fun read. He also rightly takes Obama to task for his hubris and arrogance in the selection of Warren as the presenter of the inaugural invocation. He even equates Obama's hubris with that of the Chimperator. Personally, Obama has lost my confidence and unless and until he delivers on policy and legislative promises made during the campaign, he will not win it back. To me, it's telling that one of his first actions was to insult LGBT Americans who worked so hard for his election. Here are some highlights from Rich's column:
*
Barack Obama has little in common with George W. Bush . . . But for the first time a faint tinge of Bush crept into my Obama reveries this month. As we saw during primary season, our president-elect is not free of his own brand of hubris and arrogance, and sometimes it comes before a fall: “You’re likable enough, Hillary” was the prelude to his defeat in New Hampshire.
*
He has hit this same note again by assigning the invocation at his inauguration to the Rev. Rick Warren, the Orange County, Calif., megachurch preacher who has likened committed gay relationships to incest, polygamy and “an older guy marrying a child.” Bestowing this honor on Warren was a conscious — and glib — decision by Obama to spend political capital. It was made with the certitude that a leader with a mandate can do no wrong.
*
Unlike such family-values ayatollahs as James Dobson and Tony Perkins, Warren is not obsessed with homosexuality and abortion. He was vociferously attacked by the Phyllis Schlafly gang when he invited Obama to speak about AIDS at his Saddleback Church two years ago. . . . But there’s a difference between including Warren among the cacophony of voices weighing in on policy and anointing him as the inaugural’s de facto pope. You can’t blame V. Gene Robinson of New Hampshire, the first openly gay Episcopal bishop and an early Obama booster, for feeling as if he’d been slapped in the face.
*
Warren, whose ego is no less than Obama’s, likes to advertise his “commitment to model civility in America.” But as Rachel Maddow of MSNBC reminded her audience, “comparing gay relationships to child abuse” is a “strange model of civility.” . . . Equally lame is the argument mounted by an Obama spokeswoman, Linda Douglass, who talks of how Warren has fought for “people who have H.I.V./AIDS.” Shouldn’t that be the default position of any religious leader? Fighting AIDS is not a get-out-of-homophobia-free card.
*
Obama may not only overestimate his ability to bridge some of our fundamental differences but also underestimate how persistent some of those differences are. . . . Warren’s defamation of gay people illustrates why, as does our president-elect’s rationalization of it. When Obama defends Warren’s words by calling them an example of the “wide range of viewpoints” in a “diverse and noisy and opinionated” America, he is being too cute by half. He knows full well that a “viewpoint” defaming any minority group by linking it to sexual crimes like pedophilia is unacceptable. It is even more toxic in a year when that group has been marginalized and stripped of its rights by ballot initiatives fomenting precisely such fears.
*
By the historical standards of presidential hubris, Obama’s disingenuous defense of his tone-deaf invitation to Warren is nonetheless a relatively tiny infraction. It’s no Bay of Pigs. But it does add an asterisk to the joyous inaugural of our first black president. It’s bizarre that Obama, of all people, would allow himself to be on the wrong side of this history.
*
[I]t’s also time “for President-elect Obama to start acting on the promises he made to the LGBT community during his campaign so that he doesn’t go down in history as another Bill Clinton, a sweet-talking swindler who would throw us under the bus for the sake of political expediency.”
Posted by Michael-in-Norfolk at Sunday, December 28, 2008