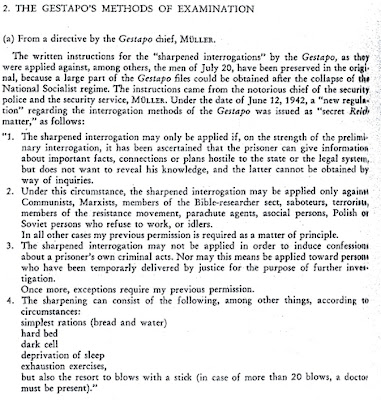 I have posted the above memo concerning approved Gestapo "enhanced interrogation" techniques previously. It bears re-posting because as Andrew Sullivan points out yet again (http://andrewsullivan.theatlantic.com/the_daily_dish/2007/12/best-of-the-d-2.html), the regime of the Chimperator is using these same tactics on detainees and is guilty of what were found to be war crimes following World War II. We have a war criminal as president, and many Americans either do not care or are too lazy to keep themselves informed and demand that Bush be held accountable. Here are some highlights from Andrews most recent post:
The phrase "Verschärfte Vernehmung" is German for "enhanced interrogation". Other translations include "intensified interrogation" or "sharpened interrogation". It's a phrase that appears to have been concocted in 1937, to describe a form of torture that would leave no marks, and hence save the embarrassment pre-war Nazi officials were experiencing as their wounded torture victims ended up in court. The methods, as you can see above, are indistinguishable from those described as "enhanced interrogation techniques" by the president. As you can see from the Gestapo memo, moreover, the Nazis were adamant that their "enhanced interrogation techniques" would be carefully restricted and controlled, monitored by an elite professional staff, of the kind recommended by Charles Krauthammer, and strictly reserved for certain categories of prisoner. At least, that was the original plan.
In Norway, we actually have a 1948 court case that weighs whether "enhanced interrogation" using the methods approved by president Bush amounted to torture. The proceedings are fascinating, with specific reference to the hypothermia used in Gitmo, and throughout interrogation centers across the field of conflict. The Nazi defense of the techniques is almost verbatim that of the Bush administration.
Over a hundred documented deaths have occurred in these interrogation sessions. The Pentagon itself has conceded homocide by torture in multiple cases. Notice the classic, universal and simple criterion used to define torture in 1948 (my italics): In deciding the degree of punishment, the Court found it decisive that the defendants had inflicted serious physical and mental suffering on their victims, and did not find sufficient reason for a mitigation of the punishment in accordance with the provisions laid down in Art. 5 of the Provisional Decree of 4th May, 1945. The Court came to the conclusion that such acts, even though they were committed with the connivance of superiors in rank or even on their orders, must be regarded and punished as serious war crimes. Each of the defendants was responsible for a series of incidents of torture, every one of which could, according to Art. 3 (a), (c) and (d) of the Provisional Decree of 4th May, 1945, be punished by the death sentence.
What I [Sullivan] am reporting is a simple empirical fact: the interrogation methods approved and defended by this president are not new. Many have been used in the past. The very phrase used by the president to describe torture-that-isn't-somehow-torture - "enhanced interrogation techniques" - is a term originally coined by the Nazis. The techniques are indistinguishable. The methods were clearly understood in 1948 as war-crimes. The punishment for them was death.
Yet the Christianists and far right continue to faun over Bush and approve of these tactics which he and Cheney approved. This speaks volumes about those who condone these tactics and/or do no demand that Bush be impeached and subsequently tried as a war criminal. It makes me very ashamed to be a U. S. citizen
Posted by Michael-in-Norfolk at Wednesday, December 26, 2007